the time I went to jenny lawson's book tour!

About a month ago (or maybe longer, actually) I got a text from a blogger pal, Daniela, saying that Jenny Lawson aka The Bloggess, was coming to Toronto for a book signing event. I freaking love Jenny’s blog, and her two books, so I was all over it. And finally, this Tuesday, it was time!

On my way down to the city, I stopped in at my local Coles to pick up another hardcover copy of LET’S PRETEND THIS NEVER HAPPENED. I'd lent my first copy to a friend, and couldn’t get it back in time, but I wasn’t about to let the opportunity of getting two signed books pass me by. Also, I’d spent quite some time painting a tribute mani, one hand for each of Jenny's covers, and it wouldn’t have been nearly as cool to show her without also having both books. However, I was grossly disappointed to find that they didn’t have any in stock.

Yes, I know, I should have prepared earlier. Shut it.

Anyway, I was explaining my plight to the wonderful staff, some of whom I’ve gotten to know over the last few years of book-buying, when Steph—the staff member who makes THE BEST recommendations ever (seriously, it’s like she’s in my brain and she introduces me to new authors every time we chat)—casually mentioned that she had a copy in her car and that I was welcome to it.

I blinked, not sure if I heard her right. But I had. The store didn’t have any hardcovers, but she did…in her car…and she was going to give it…to me.

Note: This is when the die-hard bibliophiles are nodding along, because you get it. A paperback novel is great for reading, but when it comes to being signed, it’s hardcover all the way.

So with two hardcover books in hand, and one intense hug later (seriously Indigo, give that woman a raise! Or at least a high-five. She rules!), I was in my car, heading downtown, and feeling more jazzed than ever.

When I eventually arrived at my baby brother’s condo (thanks, bro!), I was starving and raided his freezer for chicken fingers and fries (err…thanks again, bro!). While they were cooking, Daniela and I were texting and...well...I think it’s best to just let the screenshots speak for themselves. For clarification, I took the screenshots this morning. The texts actually started around 4:15pm, on the day of the signing, which was scheduled for 7:00pm. 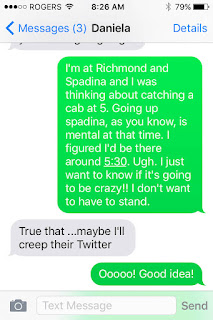 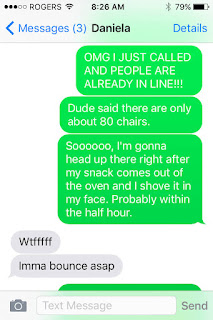 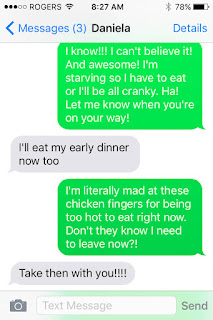 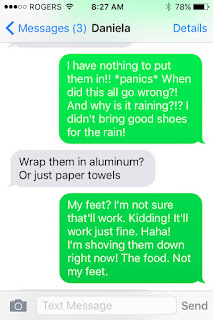 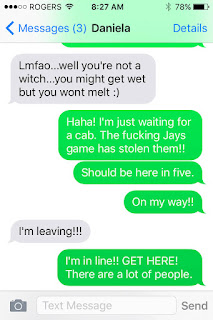 Thankfully, the end of this part of the story is good. Daniela arrived a few minutes later, we both got seats, and my ballet flats didn't get soaked on my way to the signing. Wins all around. Haha! (Well, except for the Jays. They didn't even almost win against the Royals, that night. Let's not talk about it.)

For the next two hours, we chatted away, catching up, while the excitement in the room steadily began to pulsate. But by “room,” I actually mean “children’s section of the bookstore.” Not exactly the place I would’ve put Jenny Lawson, but whatever. Haha! The wait on terribly uncomfortable chairs (I swear my butt’s still sore) went by with a little help from the organizers, including one activity of Tweeting about what made us #furiouslyhappy, for the chance to win a gift card. 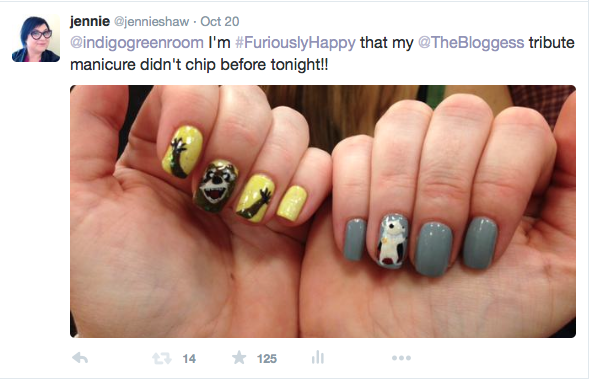 But even better? The Bloggess herself RT'd it! INFINITY WOOT!

In the midst of all the Twitter mania, the children’s book section was filling up rapidly with all sorts of interesting people. I must say, between the inflatable sheep, carved armadillo, Elvis head, custom made t-shirts, and feather boas, I very much felt like I’d found my people. It was a very fun wait.

It was about twenty minutes before Jenny was set to take the stage, when I realized that in my haste in leaving my brother’s condo, I may have forgotten to shut of his oven. Luckily, his building has a concierge, but finding the number proved to be quite the challenge. Luckily, Daniela helped and we managed to find the front desk number (from an oddly, non-specific Google search) and therefore saved ourselves (mostly me) from the humiliation of having to tell my baby bro that I burned down his entire building. Haha! 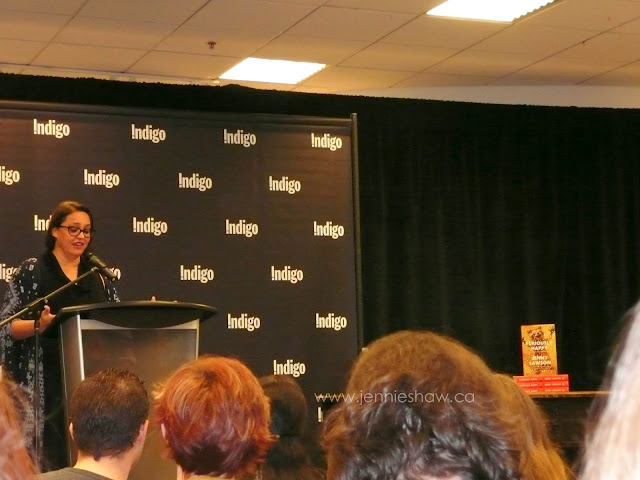 She read two chapters: "Furiously Happy Dangerously Sad" and "I've Found a Kindred Soul and He Has A Very Healthy Coat," and then answered questions from the audience, which is when I fell even more in love with her. She’s as kind as she is funny, guys. And that's saying something because you know how freaking funny she is.

After the reading, we all lined up for the signing. Again, the vibe in the room was giddy happiness mixed with enthusiastic fandom. And unfortunately, that energy seeped into my pores and suddenly, I found myself getting nervous. It was already super hot in the room children’s section, but as I thought about what I was going to say, I morphed into a total sweat bucket. And with my pale skin, all I could think was: I’m going to look like a tomato in the picture! YOU MUST CALM YOURSELF. Naturally, that internal, repeating concern only served to raise my core temperature even higher, making my sweat very much not of the "glistening" sort, and when I was ushered up to the stage, I kind of lost my mind. Meaning, my brain sprouted wings and fluttered out of my skull, leaving my body standing there stupidly, unsure on what to do, as evidenced by this photo: 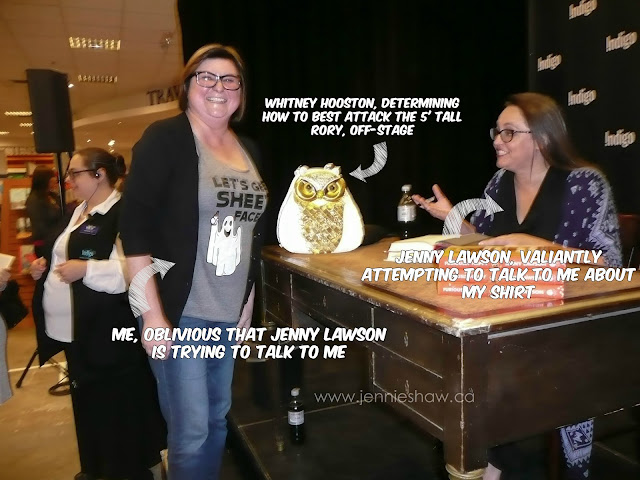 Despite seeing multiple people get their book signed FIRST and THEN get a picture, my brainless body decided to reverse the process. So while Jenny was laughing at my shirt (it says "Let's get sheet faced"), attempting to actually meet me, I wasn't even looking at her!! Also, OMG MY RED FACE.

I eventually turned to actually acknowledge Jenny like a real, functioning human, and formally introduced her to Whitney Hooston (my awesome owl purse) while clumsily handing her my books without realizing the one with my name sticky-noted on the flap wasn’t up first, which resulted in no personalization for LET'S PRETEND (you remember how I miraculously got a copy, right? How beyond happy I'd been?!). *headdesk* I was just about done at that point, which was a good thing for everyone involved, but then I sort of yelled, "Oh! I’m the nail girl!" Because, as you've read so far, I’m very eloquent under pressure. 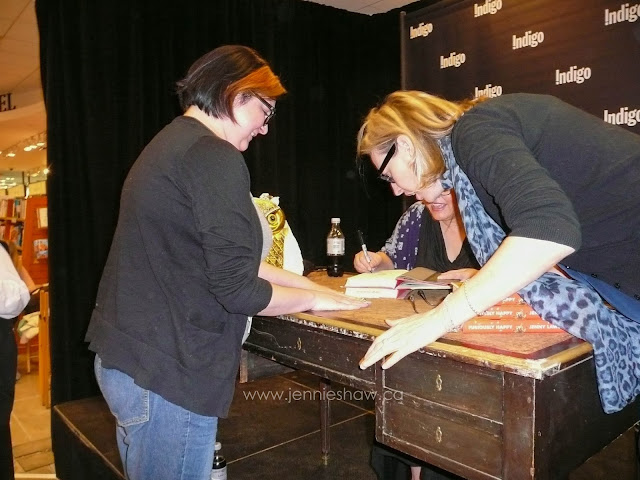 She did seem to love them, though, which officially increased my body temperature to a level only found on surface of the sun, and honestly, I don’t remember much after that. Haha! I did get a picture with her where we both looked at the camera--a book signing miracle! 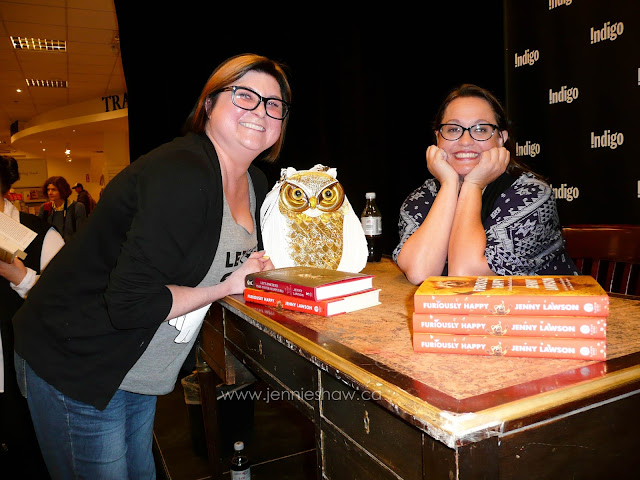 What was really nice about the setup was the stage. With Jenny sitting behind it, and a little step for us, it put our heads almost at the same level, instead of having to awkwardly crouch down. Nicely done there, Indigo!


I stepped aside while I attempted to recover my brain from wherever the heck it flew off to, and Daniela got her book signed. Before leaving, we took a picture with the 5' tall Rory cut-out, because that's what you do when there's a 5' tall raccoon photo op. Obviously. 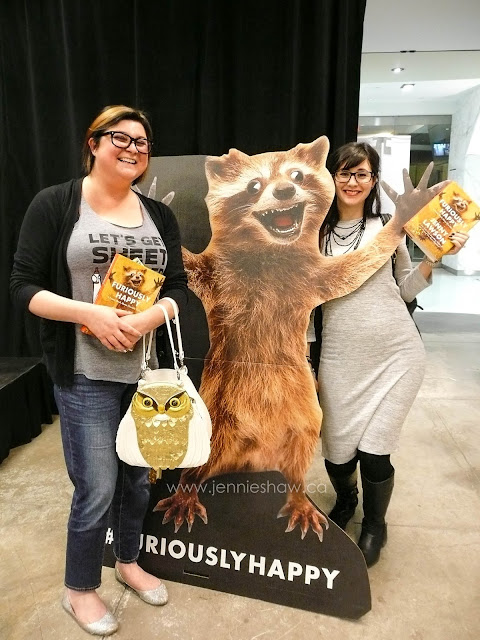 As you can see, we were both still so starstruck that we didn't copy his signature, two-hands-out-wide-mouth smile. Curse our fandom-ness. Haha! And Whitney wasn't all happy with seeing just how tall Rory was. From a distance, he seemed like a more reasonable target.

Oh, and for a better look at my nails, here they are: 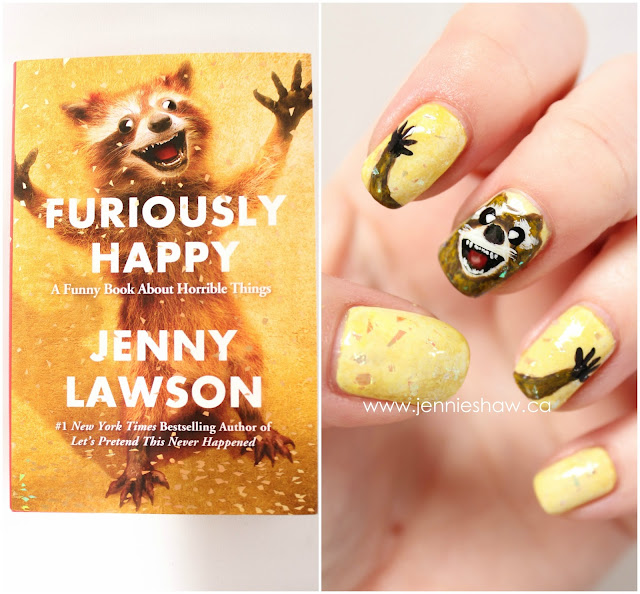 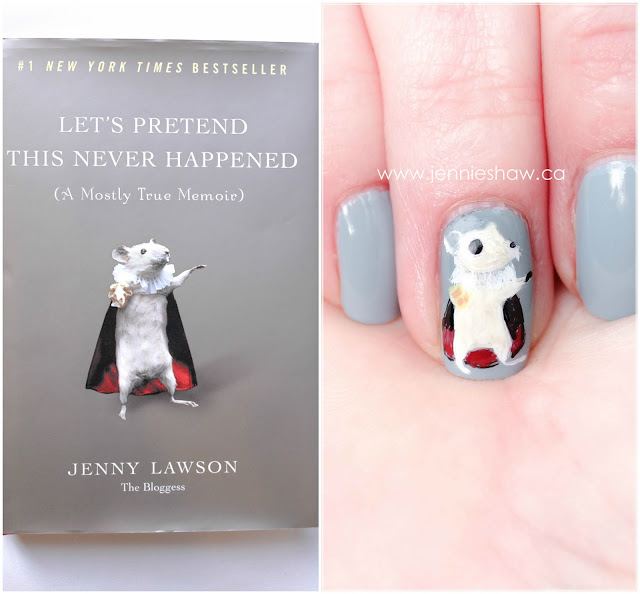 So that's the fairly ridiculous story about the very first book signing I attended, although I suspect that Jenny would probably appreciate the insane-ness. Congrats for reading the entire thing! Holy longest post ever, eh? Haha! And thanks again to Daniela, for inviting me! Love your face, girl!!

Have you been to any awesome book signings? Let me know in the comments!