I'm a few days late in posting pictures from Halloween, but it's only because I've just recovered from the crazy pants level of fun. Haha! For those who don't know, I decided to hop on a plane and head east for this year's Best Night of the Year, to attend the Pretty in Pink Halloween Party, at the Fredericton Farmer's Market.

Because it's simply the best Halloween party ever. Period. End of sentence.

And this year, just like I'd expected, it was freaking awesome!!

So here are some pics from the night! The good news is that my crew and I are really good at staying in the moment during our super fun times, but the bad news is that means we don't take a lot of pictures after we start drinking. I did manage to remember to whip out my iPhone's awful camera a few times, though, so here are a few of my faves (read: the only pictures I actually took. Haha!). 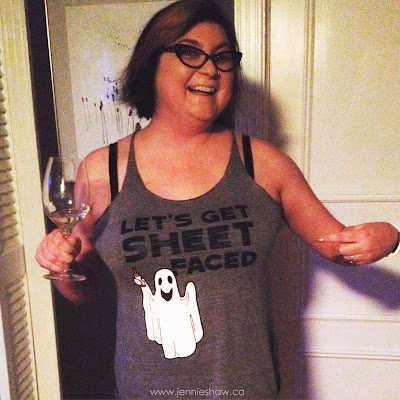 Thankfully, I chose a costume that didn't require elaborate make-up this year, but I still had to throw on my hilarious Halloween-prep tank top. Because...well, just say the phrase aloud and you'll see why I'm obsessed with it. Haha! 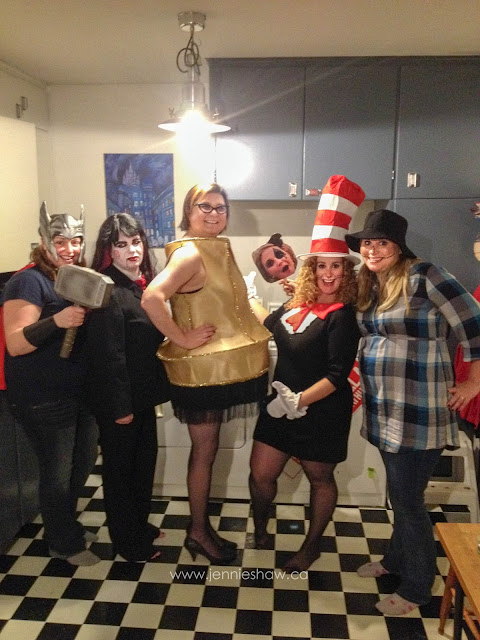 A pal of ours who's just as pro-Halloween as the rest of us wasn't able to make it, so we printed out a picture of her head and put it on a stick. You know, because a head on a stick is totally a Halloween-y thing to do. Ha!

From the left, we've got quasi-retired Thor (I like to refer to her as Parcheesi Thor, as she probably flew up from her retirement village in Florida, ha!), Jigsaw, the leg lamp from A Christmas Story, head-stick pal, Cat in the Hat, and an adorable preggo scarecrow. 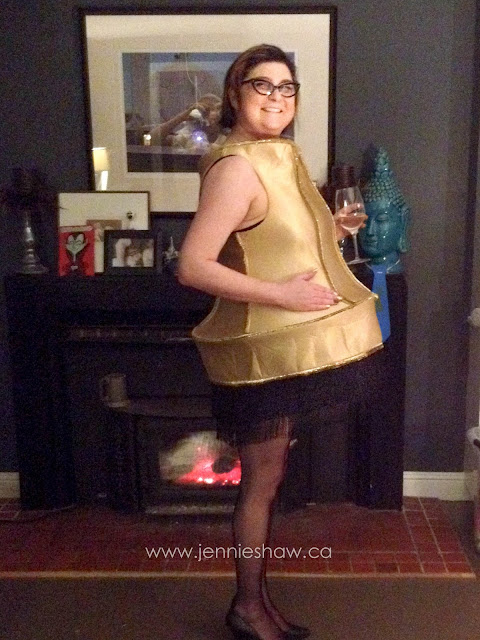 Omg, guys, I loved this costume so hard! And I was nervous about it getting squished in my bag but the hula hoop popped out pretty nicely! Also, it was quite a fitting costume as I am totally "fragile," in terms of my ability to bruise. ;) 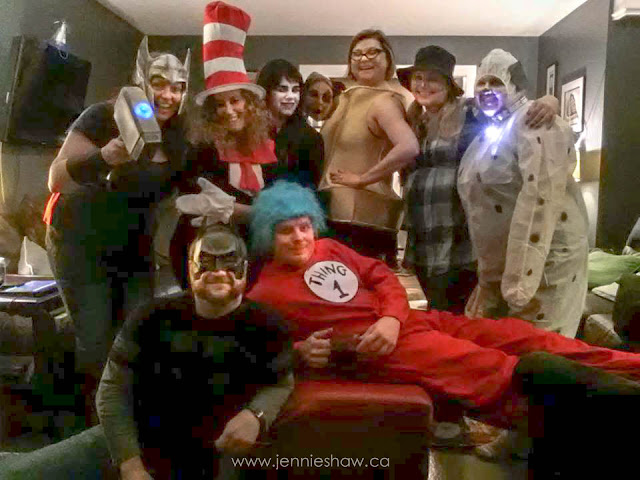 One last group photo before we left, which included Parcheesi Batman, Thing 1, and a Dalmatian.  I know that I'm biased, but we made a pretty awesome crew. 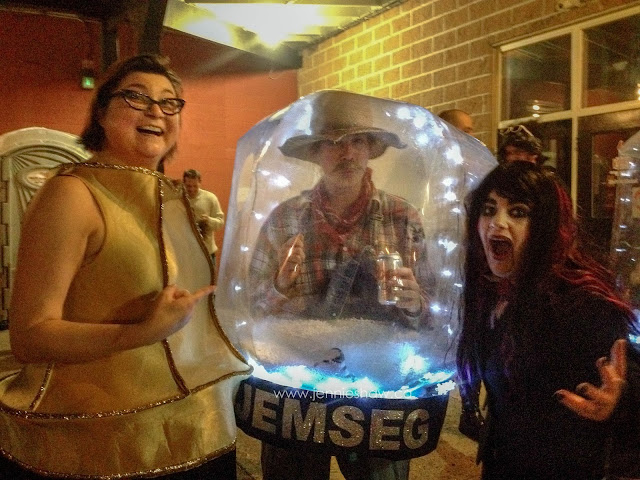 At the Market Halloween Party, there were four gals who went balls-to-the-wall with their costumes by becoming rural New Brunswick snow globes!! There are little Styrofoam bits at the bottom of each globe, which the gals would toss up to complete the effect. Obviously, she couldn't do that here because she had a drink, but it was super cool to see them do it, later in the night. And with the four of them wandering around, they kind of resembled a lit-up caterpillar. So great! (Side Note: I love my friend on the right so, so hard. That expression was on her face all night! Haha!) 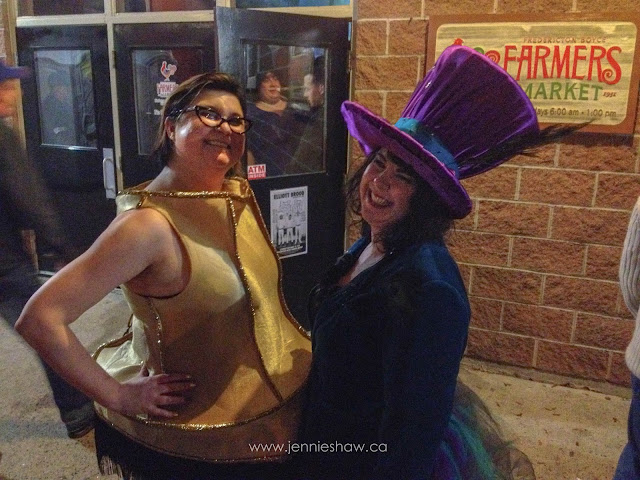 Another one of my favourites was this gal's Mad Hatter costume. Her hat was HUGE! And you can't see it, but on the other side, there was the card and an enormous feather. Plus, she had a gorgeous tutu and blazer. Well done, Mad Hatter! 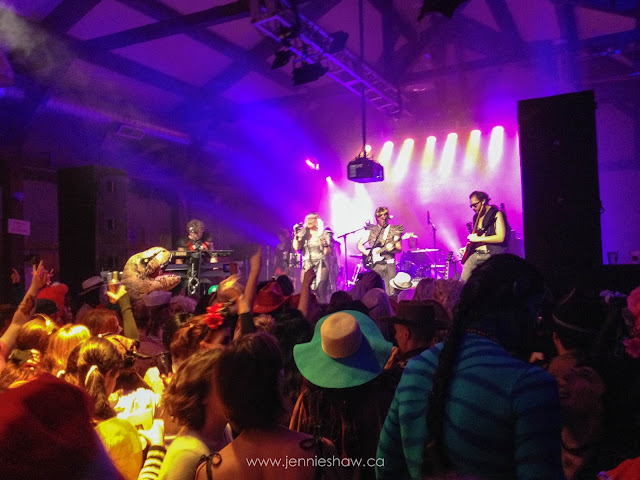 As usual, the band was unbelievable and the dance floor was packed for the entire night. Props go to the dude dressed in the inflatable raptor costume. I can't begin to imagine how hot he must have been! Seeing a raptor head rock out to 80s music kind of made my night, so thanks for taking one for the team, sweaty-face raptor! 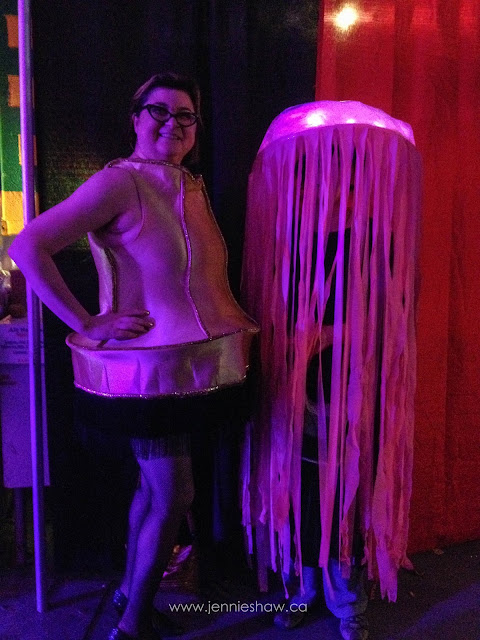 Again, the angle isn't quite right for you to see how incredible this jellyfish costume was, but rest assured that it was mental. Her head was completely lit up, and was much more bulbous than it seems in this picture. Definitely one of my favourites!

There were a few more costumes which blew my mind, but like I said earlier in this post, I didn't always remember to take a picture. Notable other costumes included Scotty P, who had "no ragrets," from We're The Millers (her entire outfit was on-point, from the bandana to the tattoo), a Maleficent who had hand-made wings made of real feathers, and a Carmen Sandiego, who not only had a red trench coat, but the most perfect red hat. Gah! Everybody looked so good!!

It was definitely a night that ranked a solid 15 out of 10 for fun and I already can't wait for next year. Woot woot for Halloween!!!