book review (with tribute mani!): why not me?

When I heard that Mindy Kaling had a second set of essays coming out, I thought: Well, crap. I mean, she's funny--hilarious, even--but I'd been on two book buying binges in as many months, and being that it's coming into spend all my money on presents for other people the holiday season, I sadly added my name to the 49-person queue at the library. But then, a couple of weeks later, Chapters had a sale on WHY NOT ME? and I suddenly found myself walking into the bookstore to get a copy (along with a few others because it's basically sacrilegious to walk into a bookstore and only buy ONE book. Also, sorry to those whose gifts may come from dollarama, haha!). 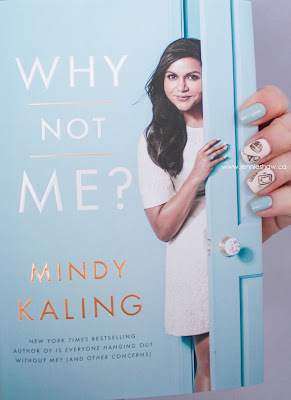 Oh-em-to-all-the-gees, guys, I'm so happy I didn't have to wait for the library copy, because this book was hilarious. I legitimately laughed out loud more times than I could count. Mindy has killer comedic timing as an actress and her writing is no different. Now, being that I'm a borderline super fan of Mindy's work on The Office and The Mindy Project, where there were too many incredible one-liners to possibly keep track of (actually, now that I've written that, I bet there's someone who's complied a list somewhere...okay, I've just returned from Google and there are MANY sites that list Mindy's zingers, so strike that earlier thought), I could hear Mindy's voice in my head, as I read. It definitely contributed to my enjoyment of the essays, but I don't necessarily think it's the kind of book where you'd NEED to be familiar with the author's previous (or current) work, in order to be in on the jokes. That's how solid the writing is. 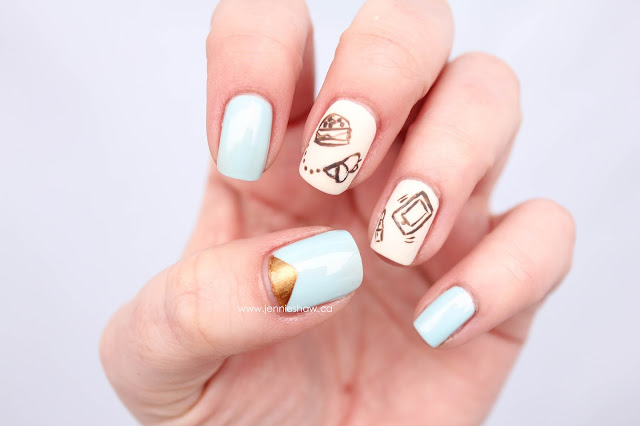 This book just screamed for a tribute mani, and I quite happily obliged. The cover is a soft, baby blue and the copper accent of Mindy's name gave it some flare. You may be wondering what the deal is with my feature fingers. The next picture will answer all of your questions (oooo, the suspense! haha!).

The table of contents had me laughing before I even began, with chapter titles like: (Minor) Fame Has Changed Me, How To Get Your Own TV Show (and Nearly Die of Anxiety), and I Love Sex Scenes!. But as I continued, it became clear that, nestled in between quippy tales and opinions, Mindy's heart was on full display. Okay, so maybe not full display, but it was definitely there. And, frankly, that just made me love her more. Her last chapter literally brought me to happy tears, not because I was laughing, but because it was so heartfelt and honest. I've often heard that true comedy MUST be honest, or it doesn't work. This book proves that for Mindy Kaling. Being hilarious is awesome, but being hilarious and honest and insightful is pretty much the trifecta of awesomeness. So bravo, Ms. Kaling. 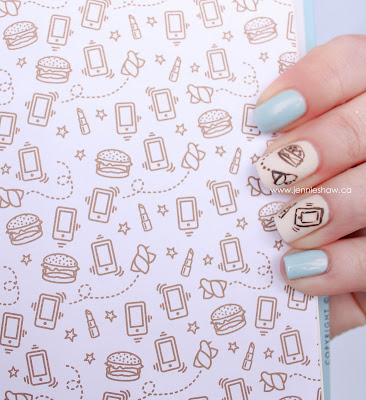 The inside jacket had this repeating pattern, which I thought was too cute for life. They're pictures of Mindy's favourite things and if I were to ever publish a collection of essays, I sooooo want samesies in mine. There'd be a cheeseburger for sure (because obviously), a bottle of nail polish, yoga pants, and Bella, the sparkly squirrel figurine that sits next to my computer.


I will warn you that WHY NOT ME? may not be the best book to read in public. Personally, I like to laugh without abandon and slap whatever's beside me, whether it be my hub's knee or a pillow. A stranger's knee, though, leads to uncomfortable and possibly unsanitary consequences. If you're like me, take heed with my warning. Haha! 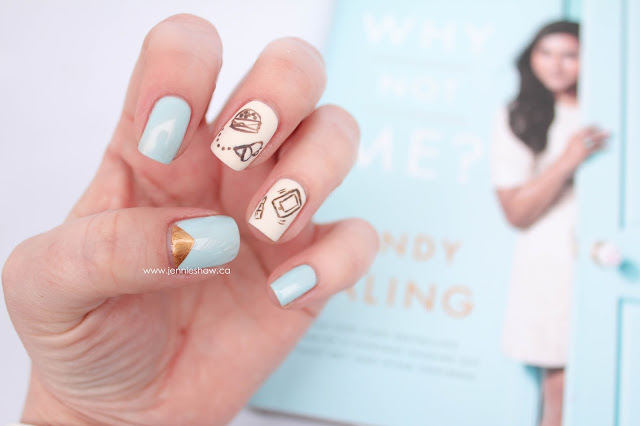 So if you're in the mood for a light, funny read, with just enough heart to at least double your current love for Mindy Kaling, then you need to pick this one up, sale or no sale. I also think it'd make a perfect gift, even for people who don't read much, because the chapters are independent of each other,  meaning you can read it over several sittings (or, you know, all at once during a Saturday morning when you can stay in your pjs and eat handfuls of dry Froot Loops without judgement. I won't tell you how to live your life). Either way, it's a win-win. Mostly because if they really aren't into reading, they may offer to give it back to you and then SCORE! FREE BOOK FOR YOU!