I've been writing seriously for about five years and in that time, I've never had a dedicated space for my work. Instead, I've just wandered around whatever house we've been in, using a laptop and whichever room had the best light. And that worked fine, until we moved into our current house, which is entirely open concept. Because of that, I've found that during the colder months (half a year, up here) instead of mixing it up and heading outside, I'd spend my whole day in the living room. Day after day after day, in the same space. After two years of this, let's just say I wasn't the happiest of campers (read: I started to go a bit nuts).

This fall, with winter rapidly approaching, I asked The Remix how he felt about me taking over our back room, which we'd primarily used as an overflow furniture/storage room. It has a strange, angled wall, and was painted a very dark grey, but I figured that if I could get a desk in there, it'd give me somewhere to be that wasn't the same space I lived the rest of my life and then I wouldn't act like a crazy cat, running around in random sprints and then perching myself on the back of the couch for an intense grooming session (note: this never actually happened, but I came close a few times, haha!).

Because The Remix is so awesome, he agreed. And so, we got to work moving everything out and then planning the next steps.

Well, it's been about two months since the project started and I'm delighted to say that my office is pretty much how I want it now. I have some of the standard office-fare, with books by authors I love, storage for all my notebooks and writing supplies, my computer desk and, of course, some kick-ass decorative pieces.

So since the New Year is an opportunity for a fresh start, I thought I'd share my new work space! I've filled it with fun things that inspire me, although they may not be exactly what you'd imagine when you think inspirational writing decor. Haha! 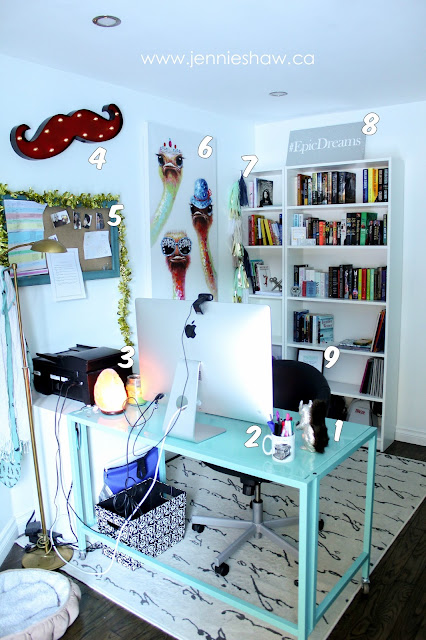 My office now takes up half of the former storage room, which I painted a very light grey, to make use of the awesome amount of natural light that comes pouring in from the double-glass doors (which you can see at the end of the post, where there's a picture from another angle). I adore my teal desk and random script carpet, plus by facing the glass doors, I always have something pretty to look at.

To make my office tour more interesting, I gave some of my favourite items a number in the above photo, and then took close-up shots of each one, where I explain why said item is so awesome. First up, there's Bella (the possibly vampiric squirrel). 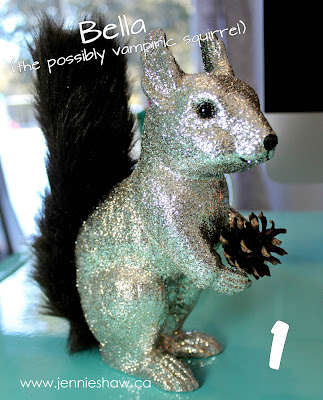 You know how sometimes, you're out shopping for a very specific item (like a new colander) and then a sparkly and ridiculous object catches your eye and you're like Who cares about that other thing that I actually need, if I don't get this magnificent creature I WILL DIE ?

Well that's how Bella (the possibly vampiric squirrel) came to live on my desk. She's so pretty, but definitely has an eat-your-face-side. I've never seen it, per say, but every so often, I catch her looking at me and I'm all did she just bare her teeth?!

(That's why I say she's possibly vampiric. If she ever animates and attacks me, believe me, you'll be the first to know. For now, it's still only a possibility.) 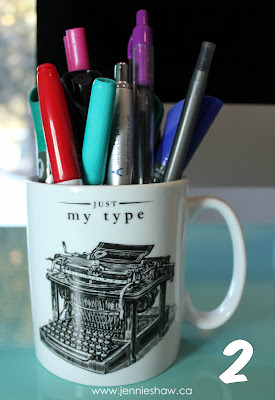 The Remix surprised me with this mug, and although it's too small for tea, because I require VERY LARGE mugs of tea, it's perfect for all of my whiteboard markers and pens. I kick it old-school with my plotting, so I use a giant whiteboard, a cork board, another (smaller) whiteboard, and various print outs to stay organized. My story lines are colour coded, on the giant whiteboard, so I have a visual where certain plot points are mentioned, along with charting character development, and timeline cues. And let me say, I seriously don't know how I got along pre-giant whiteboard. It literally changed my pantsting game. 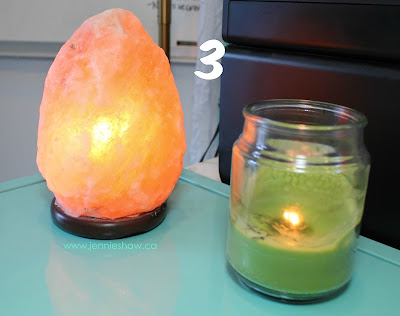 Ambiance is where it's at, so a candle and/or a cool lamp are kind of a must, for me. Luckily, my desk has room for both, so I always have some pretty light. Also, salt lamps are supposed to help disperse negative ions, clean the air, reduce allergens, and improve overall mood. There's quite a bit of science behind these rock lamps and, to be honest, I haven't done a lot of reading up on them, but it's super pretty, which was enough for me. Haha! And my scented candle of choice is vanilla lime--a delicious mix of warm and perky, which keeps me going during longer writing sessions.

I never knew I needed a vintage-looking, light-up moustache sign, but now that I have one, I can't believe I got by for so long without it! A Christmas gift from my in-laws, it adds that certain je ne sais quoi to my office. It also makes me feel a bit like I'm working at a carnival-slash-travelling-circus, which isn't the worst thing. Cotton candy, anyone? Haha! 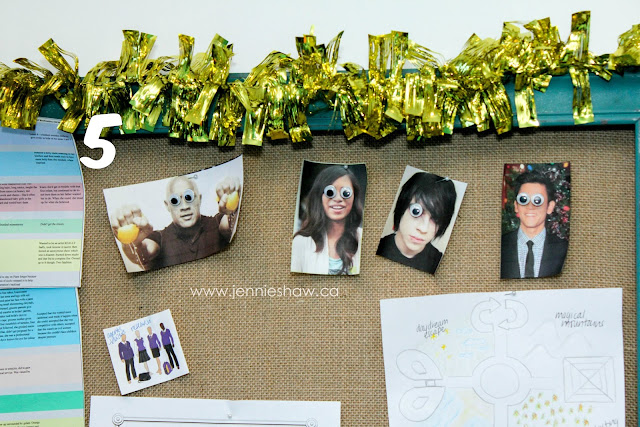 A few months back, I was having THE WORST writer's block for a new WIP, so I went to the dollar store to buy a lot of candy. Because obviously. And that's when I found these googly eye push pins. When I got home, I put them on the faces of the main characters in the WIP and now, when I'm staring at them, wondering what they'll do next, I can't help but laugh. It's a nice reminder that writing's supposed to be fun, even when it's hard. 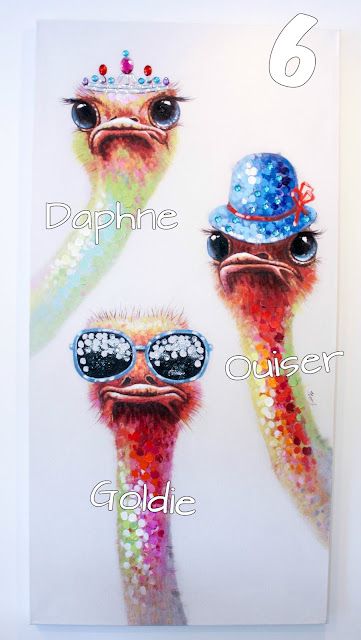 About a month before Christmas, I got a text from my mum, with a picture of this painting. I think you need this, is what she wrote below. And doesn't she know me well because I basically screamed back, YES PLEASEEEEEEEE. Now, it ended up being about two hundred percent larger than I thought but who the heck cares? Just look at those hilarious, ostrich faces!! And there are glued on gems, to boot! Like, are you kidding me, bird painting? YOU RULE!!

It took some time to figure out their names, but decisions like that can't be rushed. Haha! I love how each gal has her own expression, and now, when I do my informal office polls, there are six votes: Pickle, Pepi (our dogs), Bella (the possibly vampiric squirrel), and the Flock(ers). Sure, sometimes it makes for a tie, but that's cool. I'm no dictator. Everyone's opinion is welcome! Haha! 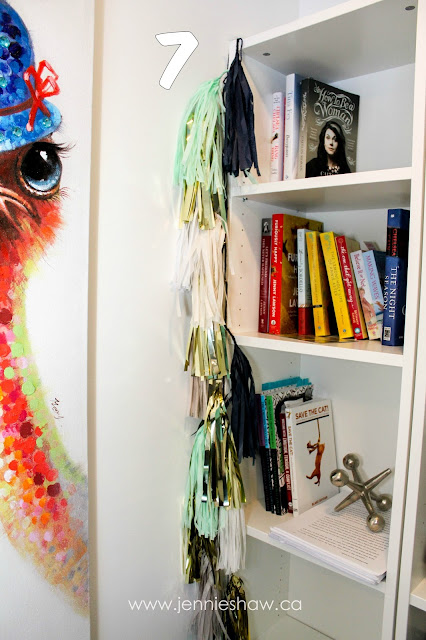 For those who don't know, Studio Mucci makes some of the funnest, reusable party supplies ever. Well, aside from the piñata. Once you crack one of those, it's pretty much done. Ha! The tassels come in two lengths and a huge variety of colours, which are always being switched up to include new combinations. Studio Mucci's also delighted to create custom orders.

I just love how the garlands look like tiny cheerleader pompoms, and every writer needs at least one cheerleader, so the garland is totally writer-office appropriate. In fact, I even ordered another one, with slightly different colours, during their New Year's sale and I can't wait for it to arrive, to frame the other side of my bookcases! Yay for cheerleader garlands!! 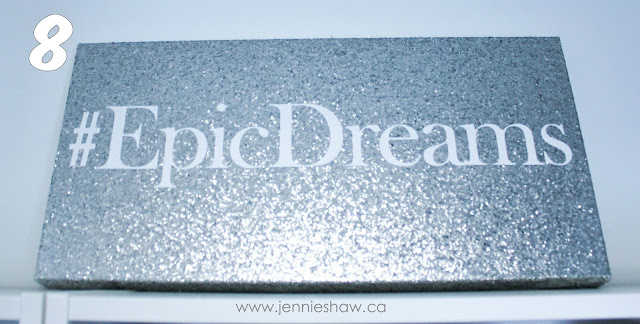 Working towards becoming a published author is QUITE the epic dream, so when I spotted this picture at a discount, home furnishings store, I just had to have it. And, of course, the fact that it's entirely made of silver glitter also may have also had something to do with it. Haha! It sits on top of my bookcase, where the afternoon light hits it, spreading sparkle happiness amongst each office wall. Love, love, love! 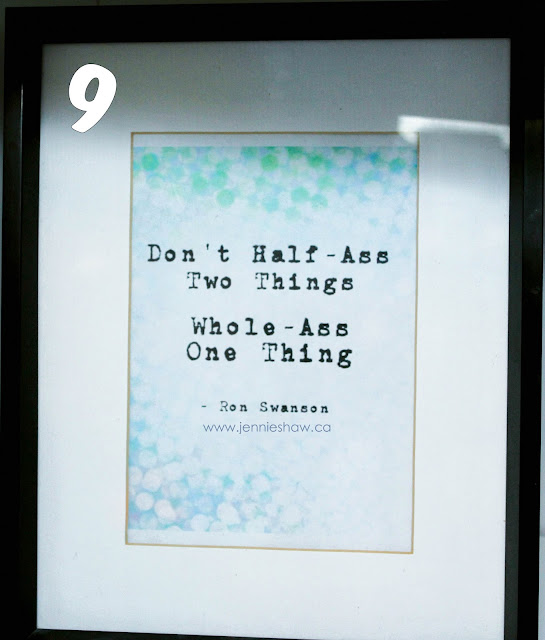 I loved Parks and Recreation, and in particular, the character of Ron Swanson, who said many insightful things. Like this quote, which reminds me that although multitasking is all fine and well, if I spread myself too thin, I cheat myself. You're a wise man, Mr. Swanson. A wise man, indeed.

So there you have it: a tour of my new office! I freaking adore having a dedicated space for writing! As you can see, I wasn't joking when I said I have a big-ass white board. It takes up an entire wall! I like to think of it as an old-school Scrivener. Haha! 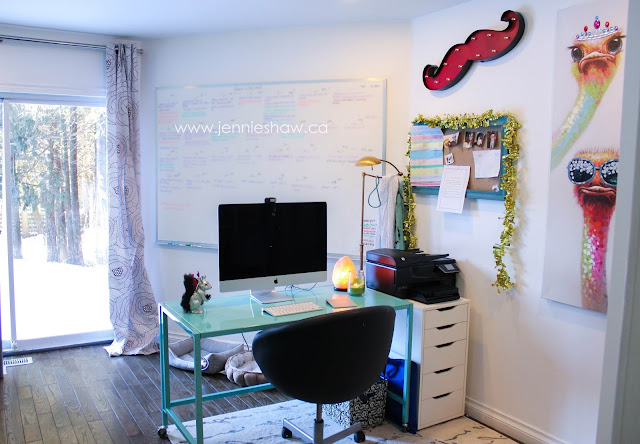 Do you have a space just for writing, or to do some other kind of creative venture? Have you found that it makes a difference? I can't believe how much faster I can get into the day's work now. It's like my brain recognizes that when I'm in here, it's time to get to it. I'm so happy that The Remix was cool with the idea, because I'm never giving it up. Never, ever, everrrrrr. Haha!