It’s funny how time can feel different, depending on what’s going on. It seems like ages ago when I picked up the first book in the Red Rising trilogy but really, it was only last year. So when MORNING STAR was finally delivered to my mailbox, my next stop was the grocery store, where I bought six frozen pizzas because there was no way I was going to waste time doing something as mundane as cooking supper when I could be reading. Haha! 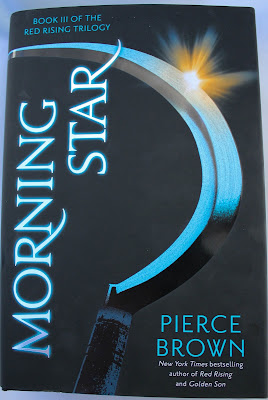 The synopsis, from Goodreads (don't worry, this isn't spoiler-y, in case you haven't read the first two):

Darrow would have lived in peace, but his enemies brought him war. The Gold overlords demanded his obedience, hanged his wife, and enslaved his people. But Darrow is determined to fight back. Risking everything to transform himself and breach Gold society, Darrow has battled to survive the cutthroat rivalries that breed Society's mightiest warriors, climbed the ranks, and waited patiently to unleash the revolution that will tear the hierarchy apart from within.

Finally, the time has come.

But devotion to honor and hunger for vengeance run deep on both sides. Darrow and his comrades-in-arms face powerful enemies without scruple or mercy. Among them are some Darrow once considered friends. To win, Darrow will need to inspire those shackled in darkness to break their chains, unmake the world their cruel masters have built, and claim a destiny too long denied - and too glorious to surrender.

From the first book, RED RISING, I knew that I’d root for Darrow until the bitter end. He was an underdog in every sense of the world—to paraphrase from Drake, he started from the bottom but now he’s here—and it was glorious to watch him rise. Get it? Rise? I know, I’m hilarious (not really, haha!).

Anyway, RED RISING set the stage for Darrow’s band of unlikely allies (who were quick to shift to enemies and back again) and GOLDEN SON took those school-time relationships in the real world. Or, the real world of The Society, anyway. This is science fiction, after all. It’s not our real world. Things got all kinds of messy in RED RISING and even messier in GOLDEN SON, where the seriously stress-inducing final scene that had me preording MORNING STAR and then counting down the days until its release because it was all kinds of bad and, frankly, I was beyond anxious about how it was going to turn out. 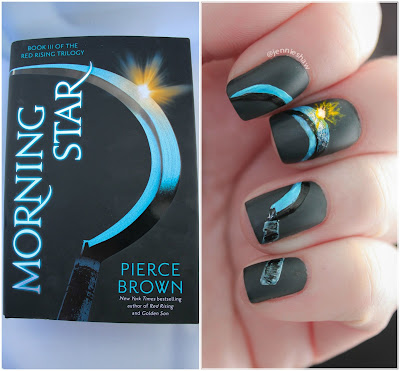 In fact, the entire series (and MORNING STAR, in particular) was basically a rollercoaster of:

NO! DEAR GOD MAKE IT STOP!

and back up to

What the what?! That was crazy pants! Did that really just happen?!

all the way to

Can I even keep reading this because it’s looking so grim? ARE YOU GOING TO MAKE ME BURN THIS BOOK, PIERCE BROWN?*

*note: I’d never actually condone burning a book—this is simply metaphoric. The bibliophiles out there know what I mean. It’s when you’re so invested that when something bad happens, you just need to destroy the badness’s existence. ;)

But the reason why these books are so enthralling is because of how much I cared about the characters. I felt for them—cried and gasped and laughed for them. I knew bad things were going to happen and that my heart would break but I had to keep reading. With countless layers of family dynamics, blood revenge, tarnished friendships, blind loyalty, love, lust, and a whole host of other emotional conflict littering every line on every page, it was a blissfully exhausting experience. I swear there wasn’t a cardboard cliché to be found throughout the entire series. 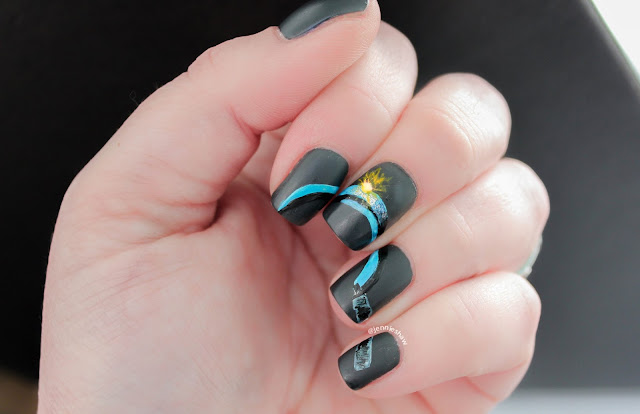 And extra props to Pierce Brown because although he created a humungous cast, I never wondered who the heck someone was, or how they related to the story. Yes, it helped to have a list of characters at the beginning of each book, but it was more than that. He’d find the one characteristic that made them stand apart—a memorable moment or description—and it would trigger my memory. It was an extraordinary demonstration of craft (and oh so awesome) because I never got taken out of the story, due to confusion. Instead, I’d understand the gravity of each character’s actions, whether they be good or bad, and each revelation had me turning the page while my hubs was forced to fend for himself because there was no way I wasn't reading through until the end. And oh em gee, what an end it was. 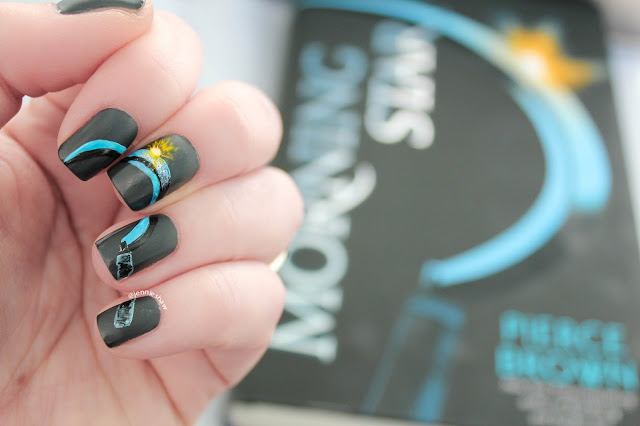 So here’s the deal: you need to read this series. You just do. And lucky for you, because all three are out now, you can binge. Just make sure you have easy-to-prepare food on hand. Otherwise, you’ll probably starve. You've been warned.

Woot woot! My first nails and tales review for 2016!

After a slow start to the year, reading wise, I finished the first book that blew my freaking mind. It was creepy, intense, and an all-around amazing ride on the awesome express. Not to mention the freaking gorgeous cover, which makes me love it even more. 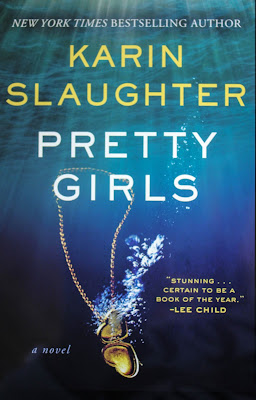 In truth, I actually finished PRETTY GIRLS a week ago and to be honest, I still don’t know how to write a review for it. I’ve read a solid amount of psychological thrillers in my day and like to think of myself as a pretty smart reader—one who can suss out clues and foreshadowing—but for the first time in a while, I didn’t know which way was up. The plot was basically one big twist, spinning me around and back again, and when I thought I was positive about something, the exact opposite was proven instead. It was exhausting and exhilarating, and it gave me my first book-hangover of the year. I'm not joking when I say that I had to wait the better part of a week before starting another because I couldn't stop thinking about it. 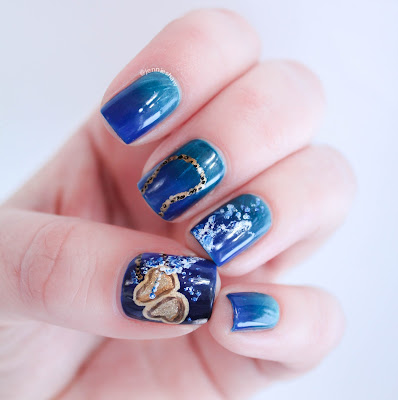 The moment I saw the cover, I could picture the tribute mani and I'm happy to report that I was able to (mostly) execute my plan! It's such a triumphant moment when that happens. Haha! I love the teal to dark blue gradient, and the heart locket with bubbles make for the perfect accent. Gah! It's just the best when covers come alive on my hands! Haha!

So because of all the above-mentioned reasons, I don’t know how to write this review. I don’t want to tell you one darn thing that would spoil all the delightfully hideous surprises that await you, should you decide to pick up PRETTY GIRLS. I don’t want to tell you which characters I liked or who I hated, and I definitely don’t want to provide examples on the magnificent way the story lines were woven together in unexpected and jaw-dropping ways. Because even if I gave you a tiny example, it could ruin everything. So what does that leave for a review, then? Not much, I've come to see. Haha! 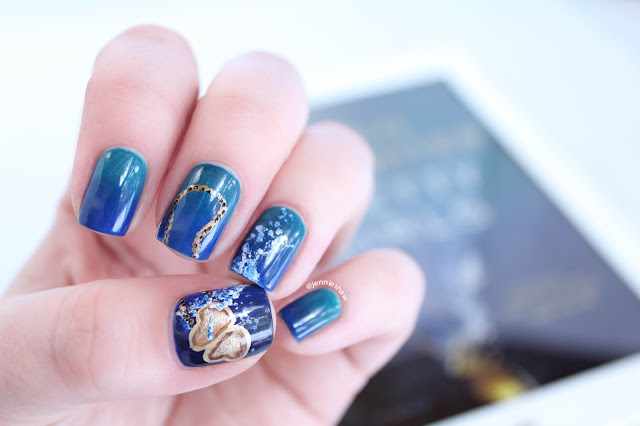 All I can really say is this: you legit need to read this book. Just trust me on this one. If you like psychological thrillers, then you need to put PRETTY GIRLS on your TBR list. Close to the top. Don’t let someone inadvertently spoil the awesomeness. The sooner you read this baby, the better. I will warn you that there's some graphic violence, which is executed in a seriously creepy, could-give-you-nightmares kind of way, so it may be a good idea to not read PRETTY GIRLS before bedtime. That said, you'll probably end up reading close to bedtime anyway, because you won't be able to put it down. And if that is the case, make sure you've got a nightlight handy--steal one from another room, if you have to. Believe me when I say that your kid won't need it as much as you will. Haha!