A couple of months ago, I spent far too much money at my local bookstore and I’m finally starting to make a dent in the ginormous pile that’s currently serving as my bedside table. Haha! One of those treasures was OMENS, by Kelley Armstrong, and it came highly recommended by staff member Stephanie, who always makes the best suggestions. 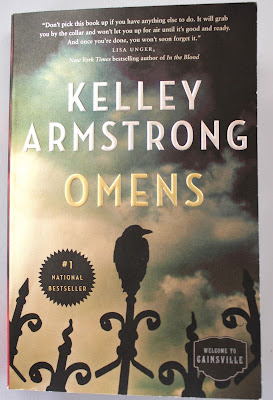 The synopsis, from goodreads:

Olivia ends up in the small town of Cainsville, Illinois, an old and cloistered community that takes a particular interest in both Olivia and her efforts to uncover her birth parents’ past.

Aided by her mother’s former lawyer, Gabriel Walsh, Olivia focuses on the Larsens’ last crime, the one her birth mother swears will prove their innocence. But as she and Gabriel start investigating the case, Olivia finds herself drawing on abilities that have remained hidden since her childhood, gifts that make her both a valuable addition to Cainsville and deeply vulnerable to unknown enemies. Because there are darker secrets behind her new home and powers lurking in the shadows that have their own plans for her.

I’ve never read a Kelley Armstrong book before which, judging from the inside of the front cover, is quite a feat considering she’s written about ten thousand of them. Okay, okay, she’s only written fifty-three (plus a number of other pieces, including short fiction). Slacker. Ha! Anyway, OMENS is the start of a paranormal suspense series, and has one of the most likable main characters I’ve read in a while. I mean, not only does she have an incredibly wry sense of humour (*giggles*) but she can interpret omens. Or, she'll eventually learn to interpret omens. For the time being, she's stuck wondering why she remembers sing-song phrases from a childhood she'd once considered to be a dream. That is, until a news report broke, shattering her crystal and diamond world. 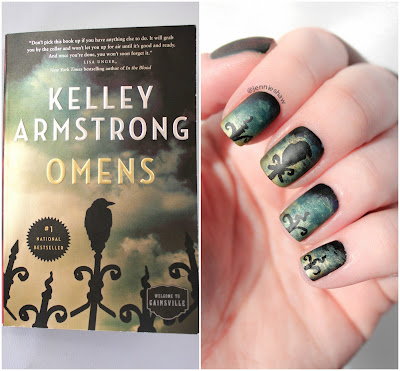 Poor Olivia-slash-Eden. One moment, she’s a philanthropist-in-training, living in a mansion and taking champagne Jacuzzi baths, and the next second, she’s all over the press as the long-lost daughter of two serial killers. Sounds crazy, right? Well, only the part about champagne Jacuzzi baths; Olivia isn’t even almost the kind of gal who’d be so wasteful and pretentious (one of the many reasons I love her). And that kind of realistic, get-on-with-it mentality serves her well when she decides to leave the Lifestyles of the Rich and Famous in order to find out the truth about her parents taking up residence in Cainsville, a tiny town in the middle of nowhere, where her biological parents used to live.

Now, it may seem obvious that the town of Cainsville is a character in its own right (as the series is literally called the Cainsville series), but I didn’t anticipate how much of the book would be about the small, rural community. And that’s really what hooked me. Because yes, there are at least seven different sub-plots that piqued my curiosity, along with delightfully strange characters of all sorts, but I suspect that all paths lead back to Cainsville, where there appears to be a metaphorical onion of paranormal mystery--layers upon layers of intrigue--all they way down to the mysterious gargoyles. What's the deal with those little guys? I need to know! Haha!

So in that sense, OMENS has airs of The Witches of Eastwick, and I'm pretty much obsessed with finding out more about Olivia. Now, I will say that things took a bizarre-o turn at one point, and it almost turned me off, but I was sucked in by that point and had to keep going. 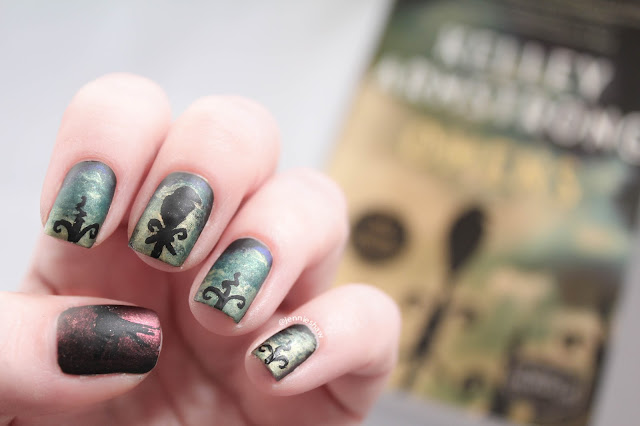 That’s pretty much all I want to reveal for now, mostly because all I have is speculation as to what’s really going on in Cainsville and at the end of the day, isn’t that what the first book of a series is supposed to do? Poke and prod at your curiosity? Of course it is. Because if the first in a series isn’t intriguing then it hasn't been done right. So rest assured, guys and gals, OMENS is certainly an engaging read and I feel confident that the rest of this series will be bananapants. I'll definitely be picking up the second (which has been out for a bit so I don't have to wait, woot!) and if you're into paranormal mystery/suspense, I recommend that you do, too!