I'm a little behind on this review, but that's because the mani I wanted to do required supplies I didn't have (shocker, I know), but finally, they arrived in the mail, so I'm psyched to share what has been my most challenging cover mani, to date. You know, alongside a review of the second book in the Red Queen Series. Haha! This book was jam-packed with action, intrigue, and a whole lot of awesome, guys and gals, so let's get started! 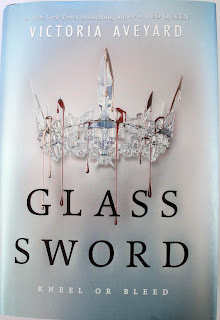 The Synopsis, from Goodreads:

Mare Barrow’s blood is red—the color of common folk—but her Silver ability, the power to control lightning, has turned her into a weapon that the royal court tries to control.

The crown calls her an impossibility, a fake, but as she makes her escape from Maven, the prince—the friend—who betrayed her, Mare uncovers something startling: she is not the only one of her kind.

Pursued by Maven, now a vindictive king, Mare sets out to find and recruit other Red-and-Silver fighters to join in the struggle against her oppressors.

But Mare finds herself on a deadly path, at risk of becoming exactly the kind of monster she is trying to defeat.

Will she shatter under the weight of the lives that are the cost of rebellion? Or have treachery and betrayal hardened her forever?
The electrifying next installment in the Red Queen series escalates the struggle between the growing rebel army and the blood-segregated world they’ve always known—and pits Mare against the darkness that has grown in her soul.

Mare Barrow: a gal after my own heart. She's such an interesting character, with lots of choppy water running underneath her calm exterior.  But that's probably how I'd be too, if I were stuck between two worlds, uncertain on which side to pick. As a sort-of-Silver (meaning she has special powers) but having grown up as a Red (the oppressed people in Mare's society), Mare has a unique point of view. Sometimes, the little lightening girl doesn't do the *right* thing, but since the very definition of "right" depends on which side you stand on, it's been enthralling to watch her figure out her next steps. And what I loved about GLASS SWORD, is that Cal (former ruler whose brother Maven is on the loose, trying to basically destroy all those who oppose him) is just as uncertain as Mare. When trust is broken, it's impossible to rebuild. Sure, you can whip out the crazy glue and try to piece things back together, but the cracks will always show. Kind of like shattered glass (zing!). But I could feel their want to trust each other. Two lost souls who, for better or worse, are tied together. Necessity can sometimes trump deep-rooted fears, but that certainly doesn't mean it's easy.

Like any good second instalment, many new questions and problems arose for Mare et al, and it turns out that the world is far more complicated than she could ever have imagined. Nothing is black and white, even when it presents itself as such. Yes, it's easy to say that bad guys should lose and the good guys should win, but when the divide between good and bad is blurred beyond recognition, it's a challenge to find the true course. And poor Mare is caught up in it all, falling victim to her ego more times than she should, but through it all, she retained my sympathy because in her own way, she really does want a better life for most.

I will say that the addition of several new secondary characters made Mare's stumbles more bearable, and I was left with a hopeful feeling that...well...I actually can't tell you what I felt hopeful about because that would be a spoiler, but what I can say is: it's a good thing that Mare found people she truly can trust. Because with what's coming for Mare and The Scarlet Guard, she'll need all the help she can get. 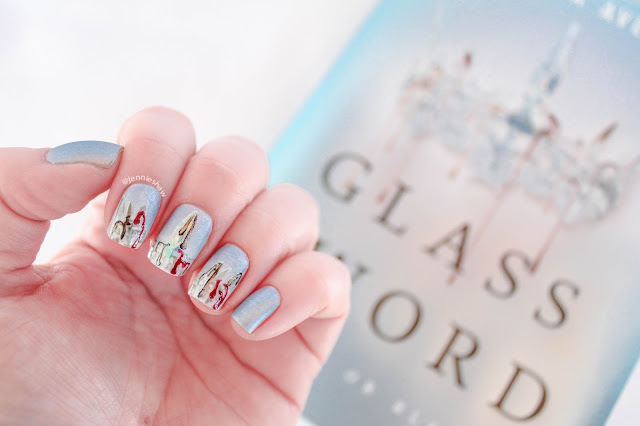 So if you're into quick-paced, X-Men-ish, dystopian novels, then you'll probably be all over the Red Queen Series. There are two books left now, which gives you plenty of time to catch up and then wait impatiently alongside the rest of Mare-a-holics. Haha!

Skylar, by Julep
Paper Mache, by Fingerpaints
Splash, by Pure Ice
Liquid Leather and UV Meant To Be, by China Glaze
I Vant To Be A-Lone Star, My Silk Tie, and Matte Top Coat, by OPI
Scandal, by ORLY
Reflective foil
A small dotting cool, striping brush, and triangular makeup sponge

For more, non-book-cover manis, be sure to check out my IG account! (@jennieshaw)