THE FIREMAN is the first book I’ve read by Joe Hill and it definitely won’t be the last. I chuckled, cried, and needed to take a small break during the end because my stomach was queasier than when I went deep-sea fishing during a Caribbean thunderstorm. In other words, THE FIREMAN was bananapants!

(Note: there are a lot of italicized words in this review because it's the only way I could convey just how very very awesome THE FIREMAN is. You've been warned. ;) ) 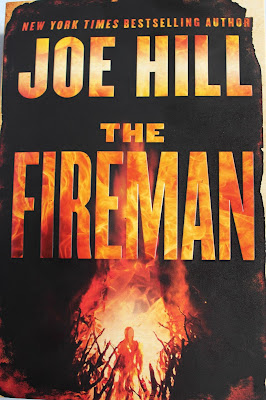 From the award-winning, New York Times bestselling author of NOS4A2 and Heart-Shaped Box comes a chilling novel about a worldwide pandemic of spontaneous combustion that threatens to reduce civilization to ashes and a band of improbable heroes who battle to save it, led by one powerful and enigmatic man known as the Fireman.

The fireman is coming. Stay cool.

No one knows exactly when it began or where it originated. A terrifying new plague is spreading like wildfire across the country, striking cities one by one: Boston, Detroit, Seattle. The doctors call it Draco Incendia Trychophyton. To everyone else it’s Dragonscale, a highly contagious, deadly spore that marks its hosts with beautiful black and gold marks across their bodies—before causing them to burst into flames. Millions are infected; blazes erupt everywhere. There is no antidote. No one is safe.

Harper Grayson, a compassionate, dedicated nurse as pragmatic as Mary Poppins, treated hundreds of infected patients before her hospital burned to the ground. Now she’s discovered the telltale gold-flecked marks on her skin. When the outbreak first began, she and her husband, Jakob, had made a pact: they would take matters into their own hands if they became infected. To Jakob’s dismay, Harper wants to live—at least until the fetus she is carrying comes to term. At the hospital, she witnessed infected mothers give birth to healthy babies and believes hers will be fine too. . . if she can live long enough to deliver the child.

Convinced that his do-gooding wife has made him sick, Jakob becomes unhinged, and eventually abandons her as their placid New England community collapses in terror. The chaos gives rise to ruthless Cremation Squads—armed, self-appointed posses roaming the streets and woods to exterminate those who they believe carry the spore. But Harper isn’t as alone as she fears: a mysterious and compelling stranger she briefly met at the hospital, a man in a dirty yellow fire fighter’s jacket, carrying a hooked iron bar, straddles the abyss between insanity and death. Known as The Fireman, he strolls the ruins of New Hampshire, a madman afflicted with Dragonscale who has learned to control the fire within himself, using it as a shield to protect the hunted . . . and as a weapon to avenge the wronged.

In the desperate season to come, as the world burns out of control, Harper must learn the Fireman’s secrets before her life—and that of her unborn child—goes up in smoke.

Before I get started, I’d like to talk about the kind of book this is. Goodreads users define it as Horror/Fiction/Science Fiction/Fantasy/Thriller, which I guess it is, but it’s also so much more. At first, I was intimidated by the 700+ pages (the book actually weighs over a pound; I know because I weighed it myself for a bet with my hubs that I won, haha) but now that I’ve finished it, I understand why Hill needed the length. Because THE FIREMAN isn’t a story that fits neatly into a box. It isn’t a book about one main character, or even two. And there isn’t just one plotline driving the action, there are too many to count. That adds up to a book that has a little bit of everything—surprise, love, betrayal, joy, deception—so it doesn’t matter what genre you like to read because good stories are good stories. And the best stories are ones that speak to us all. THE FIREMAN is one of those stories. 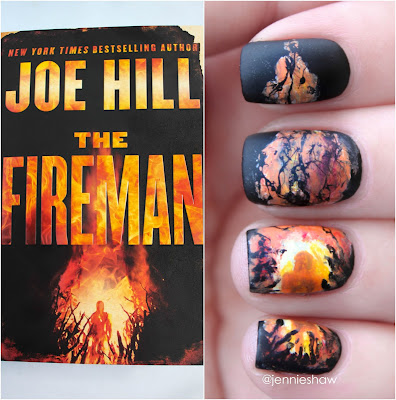 Within the first chapter, I was in it for the long haul and not once, did my attachment to Harper wane. Her journey brought out the best and worst of her (sometimes both, simultaneously) and I was so absorbed by Harper’s voice that I didn’t notice my fingers digging into the sides of a few pages, leaving permanent wavy indents. And for a reader who goes to great pains to not crack spines, that’s saying something.

Naturally, there’s a LOT that happens which isn’t touched upon with the jacket description but I’m not a reviewer who includes spoilers. A serious bummer in this case because all I want to do is slip on a pair of jammies, pour a glass of strawberry lemonade, and talk all about how much I loved this book.

Because things happen, guys and gals. Things that lead to events. And those events gave me feelings. Oh so many feelings.

And the characters! There are so many! And all of them are flawed, scared, and human, which means that I loved them. Err…except for Jakob and a handful of other nasties. Because obviously.

Plus, the concept is pretty cool. Or hot, I guess, if you want to be more specific. Ha! I mean, having a spore as deadly as Dragonscale look pretty as it forces you to combust into a flaming ball of death is an original way to deliver an apocalyptic tale of hardship and triumph. Sure, the smoking thing is kind of a downer but if I'm going to go out in a literal blaze of glory, I'd want to look good beforehand. Vain Dragonscale-infected woman says what? ;) 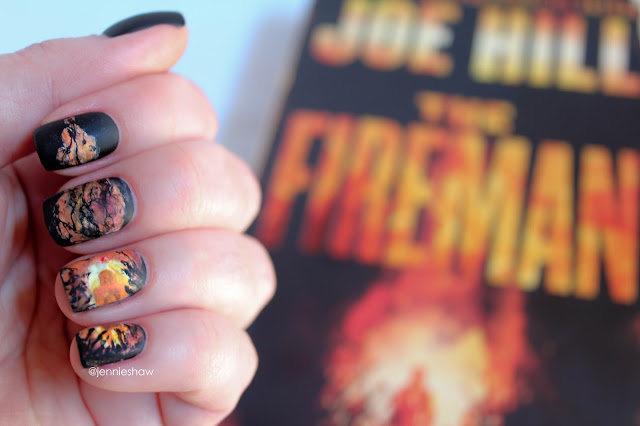 So what I need you to do right now is head on over to your bookseller of choice and pick up a copy of THE FIREMAN. Then, fake the stomach flu so you can spend the weekend reading. The good news is that because it’s a long weekend, you have a chance of finishing it. Because once you start, you won't want to stop.

For more non-book-related manis, check out my IG page! (@jennieshaw)