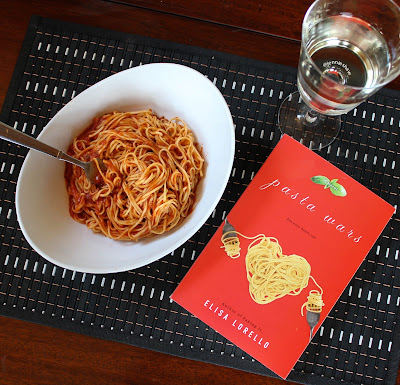 Slim, successful, and soon to marry the man of her dreams, Katie Cravens is leading the life she always wanted. As the face and CEO of Pasta Pronto, a Carbs for the Calorie-Conscious line of frozen food, Katie chooses to live life like one of her Slimline Spaghetti dinners no mess, no surprises, and everything tied up in a neat little package. But when Katie's fiance runs off with another woman and a quality control fiasco sends her customers running for the hills, it's time for Katie to make a change.

I’ve been a fan of Elisa Lorello for quite some time. Her writing is next-level fantastic and her works illuminate the complexities of relationships while pushing my feeling buttons to the point where I end up ugly crying on an airplane, much to the delight horror of the elderly man sitting next to me (note: this is a true story). Although PASTA WARS is a bit more lighthearted than her other books, I'm happy to report that all of Lorello's fantastic-ness remains intact. (Yay!) 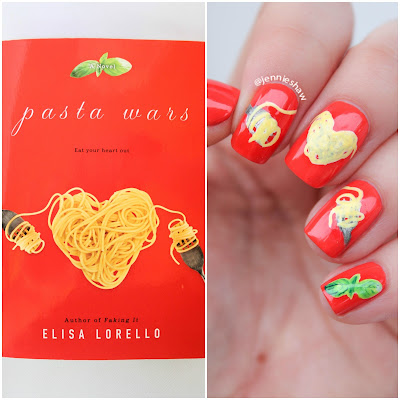 Katie was a relatable hot mess of sad (because nothing is sadder than a hot mess not realizing the degree of their hot mess-ness) and Luca was passionate, cranky, but oh so lovely to imagine, even when he stormed from a room. Or was it especially when he stormed from a room? Haha! Either way, the setup for chemistry was akin to that of a slacker seventh grader’s final project: explosive. Kaboom!

And don’t even get me started on the food. Holy awesomesauce! Literally. Because all of the sauces Luca makes sound freaking incredible. The level of description—what to chop, peel, grate, and drizzle—read like a cookbook. I was honestly left believing that if I followed along, I too could create Luca’s drool-worthy concoctions. And it's just the best when I feel like I’m in the action, kneading and whisking and tasting sweet vine tomatoes alongside flavourful basil. I mean, yum, right? Granted, I was more like Katie than Luca, being that I’m not the greatest chef, but I swear that when Luca melted butter in a pan, I could smell it. Unfair, really, because I wasn't able to eat the delectable treat he nonchalantly whipped up. Like, can a girl get a scone with fresh berries, please? 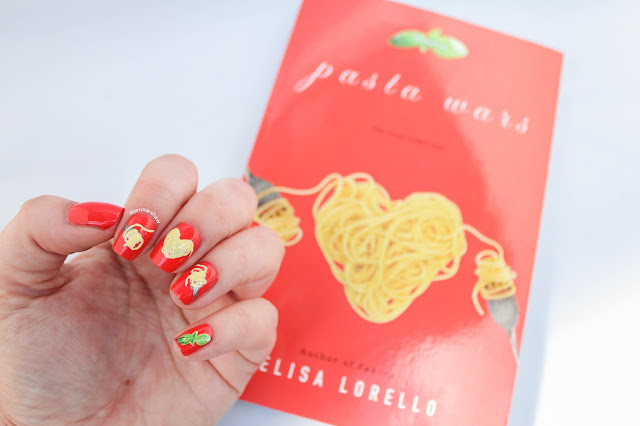 So in sum, PASTA WARS matches a relatable female hot mess with an equally relatable hot hunk of man mess and they make pasta together. I seriously don’t know what else you need to know about this book. Just pick it up already! But you should probably have Italian food on standby before you start reading or you’ll be chewing the pages in a vain attempt to taste the deliciousness. (Take my word for it, though, the paper just ends up tasting like paper. Haha!)

I'd also like to give a special shout-out to Elisa for sending me a copy of PASTA WARS. Until January of 2017, it's only available at Barnes & Noble and being from The Great White North, we don't have B&N. *cues weeping* If you're like me, being that you don't have access to B&N, now's the time to scroll through your American contact list and see who can get you a copy. January's a long time away, folks! Especially for a super fun book like this!

And for more, non-book-related manis, be sure to check out my IG page! (@jennieshaw)

I started the Grisha Trilogy after they'd all been released and thank frickin' goodness because it would've been a painful wait after finishing SHADOW AND BONE. The writing was so engaging that I read all three books in a week, which is why I decided to review the whole darn thing at once.  Because holy magical awesomeness! 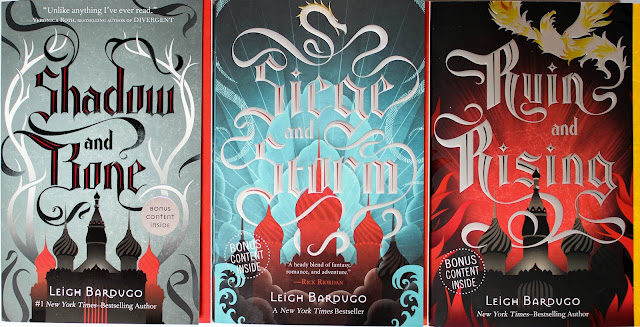 To avoid spoilers, I'll only share the back jacket for SHADOW AND BONE (Book #1), from Goodreads:

Surrounded by enemies, the once-great nation of Ravka has been torn in two by the Shadow Fold, a swath of near impenetrable darkness crawling with monsters who feast on human flesh. Now its fate may rest on the shoulders of one lonely refugee.
Alina Starkov has never been good at anything. But when her regiment is attacked on the Fold and her best friend is brutally injured, Alina reveals a dormant power that saves his life—a power that could be the key to setting her war-ravaged country free. Wrenched from everything she knows, Alina is whisked away to the royal court to be trained as a member of the Grisha, the magical elite led by the mysterious Darkling.
Yet nothing in this lavish world is what it seems. With darkness looming and an entire kingdom depending on her untamed power, Alina will have to confront the secrets of the Grisha . . . and the secrets of her heart.
___

Oh man. This trilogy really was amazing. Just re-reading the back jacket for SHADOW AND BONE put a smile on my face. Haha! There were so many elements to love about this trilogy, but one that stands out in particular is character motivations. In this series, both the good guys and the bad guys long to be part of something bigger than themselves, to feel like they belong. Granted, they had different ways of showing it, by wanting to either save or destroy the kingdom of Ravka, but their motivations came from the same source. 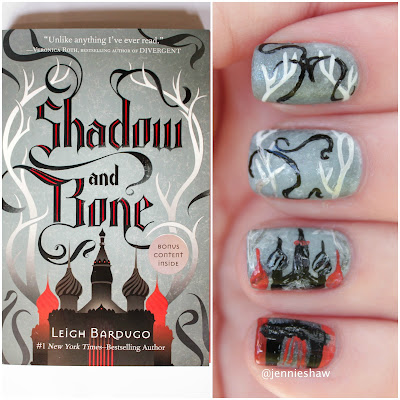 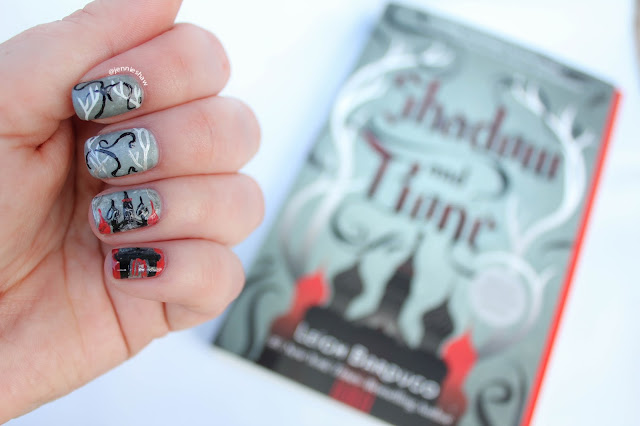 It was a genius move, really, because every reader has felt the ache of loneliness at some point, and that sympathy snakes its way towards the Darkling who, as you can probably guess by his name, is the bad guy. Nobody’s all good or all bad, and Bardugo's uncanny knack for writing characters who are ripe with redeemable virtues yet also possess terribly unflattering ones, shines throughout each instalment. And by sympathizing with the Darkling, I ended up rooting for both sides. When one side got a win, I'd want to raise my fist in triumph, but I'd also feel a twinge of compassion for the defeated--a seriously cool reading experience. 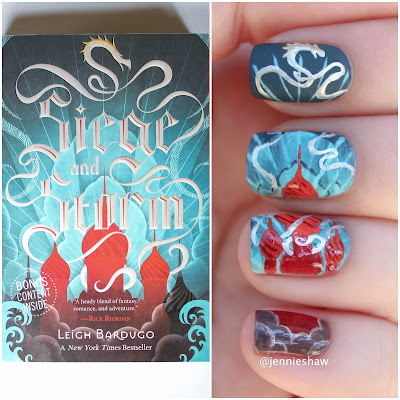 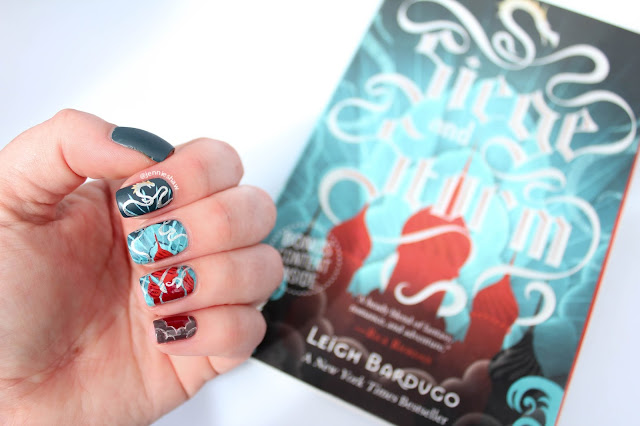 Rich descriptions are another standout element of the Grisha Trilogy. With technicolor imagery, each scene leaps off the page. When Alina discovers ornate carvings in a grand castle, my fingers grazed the ridges with her, and if characters found themselves shivering on the side of a snowy mountain, I practically had to put on a sweater.

In addition to awesome characters and killer settings, there’s tons of action in each book--no save-it-for-the-grand-finale stuff happening here!--and the stakes get higher and higher as you go along (to the point where you may read RUIN AND RISING in one day, which is exactly what I did because oh em gee all the things!!). Plus, there’s the whole magical powers thing. And the romance. And, you know, basically everything you'd ever want in a trilogy. Haha! 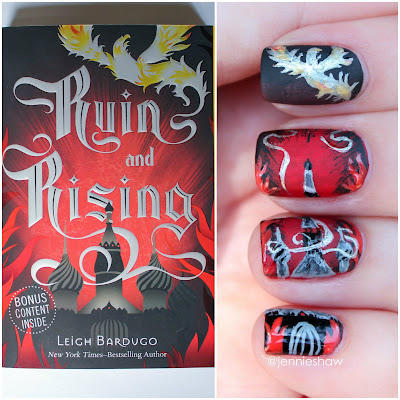 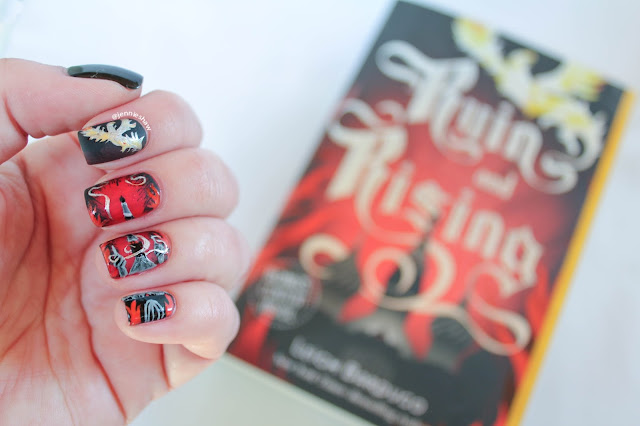 So yeah. You need to read the Grisha Trilogy because it's a tale that will sharpen your imagination until you basically feel like you’re Alina, and since Alina is wicked cool, that’s a pretty marvelous thing. Also, when you're done you'll need to pick up SIX OF CROWS (the first book in another series) because it's set in the same world and is also all kinds of awesome. But buy hard copies of them all, okay? I mean, you did see the ridiculously gorgeous covers, right? Like I wasn’t going to do a mani for all three? *rings obvious bell*

Yes, I realize I'm recommending you buy four books (technically five because the sequel to SIX OF CROWS comes out in the fall yay!) but I swear you won't regret it. Consider them your summer reading list, if that'll convince you, although I wouldn't be surprised if you whip through the four published books in no time flat because once you get a taste of Grisha life, you won't want to stop.

And for more, non-book-related manis, be sure to check out my IG page (@jennieshaw)! 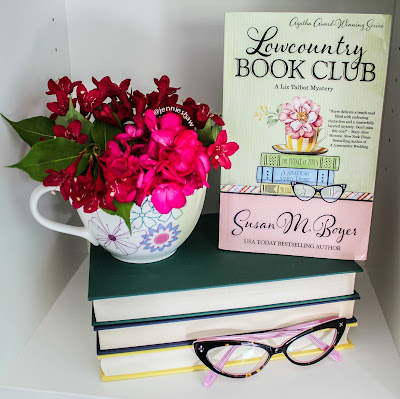 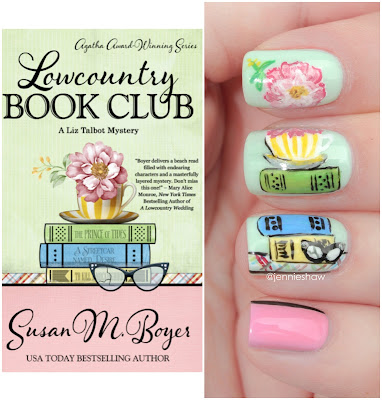 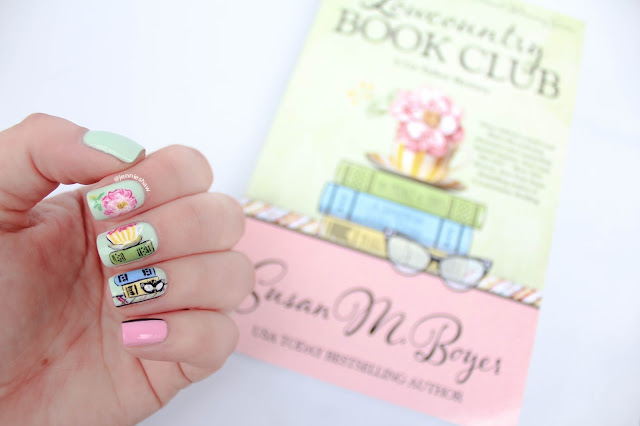