It was tense, insightful, gorgeously written, and positively bursting with interesting moral dilemmas. I read it quickly, even though I didn't want it to end, and now it feels like ten lifetimes until the next book is slated for release. But isn't that the best-slash-worst way to start a series? Of course it is! (Unfortunately. Haha!) 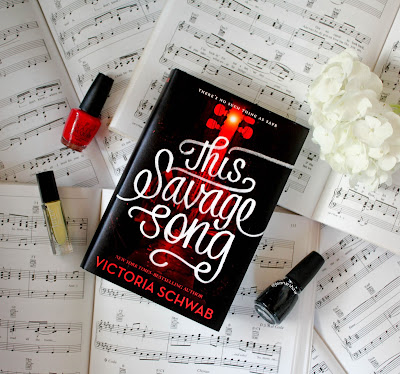 There’s no such thing as safe in a city at war, a city overrun with monsters. In this dark urban fantasy from author Victoria Schwab, a young woman and a young man must choose whether to become heroes or villains—and friends or enemies—with the future of their home at stake. The first of two books.
Kate Harker and August Flynn are the heirs to a divided city—a city where the violence has begun to breed actual monsters. All Kate wants is to be as ruthless as her father, who lets the monsters roam free and makes the humans pay for his protection. All August wants is to be human, as good-hearted as his own father, to play a bigger role in protecting the innocent—but he’s one of the monsters. One who can steal a soul with a simple strain of music. When the chance arises to keep an eye on Kate, who’s just been kicked out of her sixth boarding school and returned home, August jumps at it. But Kate discovers August’s secret, and after a failed assassination attempt the pair must flee for their lives.

Before I get into my review, I think I should share something: I'm a sucker for the name August. Especially when August is a male character, because it makes me think about the movie August Rush, which has one of the best soundtracks ever. So the combination of a male character named August and the musical-ish story of THIS SAVAGE SONG gave me the warm and fuzzies right away. That said, those warm and fuzzies didn't last long because this book is downright dark.

But dark is how I like my YA, so as far as I'm concerned, this book was a total win. I mean, Kate takes no crap from anybody, even if it means getting her hands dirty, there are monsters everywhere, and her world is on the brink of total anarchy. Meanwhile, August is a sympathetic outsider who just wants to belong. But like the back jacket states, he's also one of the monsters.

So who's the good guy/gal?

Who's the bad one?

What the frick is happening?

It's a genius idea, when authors create characters with sliding scales of light and dark. Mostly because it makes me hella nervous, which explains why I read this book so quickly. 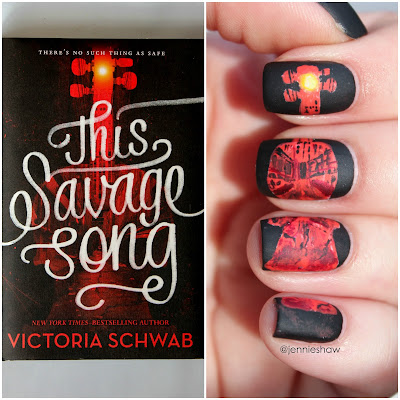 Another bias I have to admit is that I'm bananas about books that blur the line between right and wrong. The messier the morality, the better the book, and THIS SAVAGE SONG is messier than messy--think, glitter-bomb-in-a-tornado messy, only the glitter would be pointy and sharp and probably murder you. Schwab's concept is deliciously complicated, in that regard, and it makes meaningful points about the world that we, the reader, live in. But, you know, in a subtle way because nobody likes a book on a soapbox. 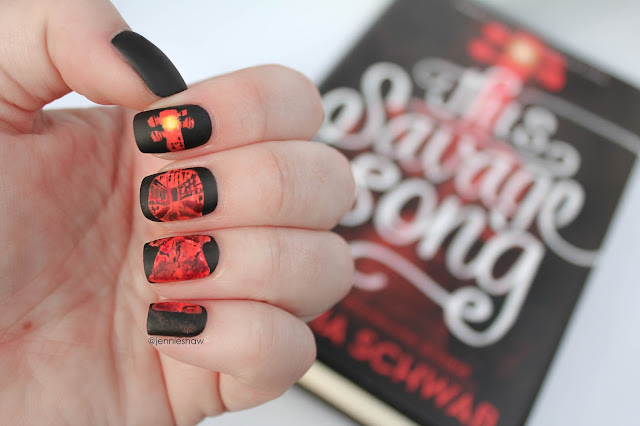 Plus, there are creepy childhood singsongs. And no love-triangles (which is a pretty common occurrence in YA). Oh, and I can't forget the atmospheric amazingness. Did I feel like I was actually in Verity? Yup. I totally did. And trust me, it was terrifying.

Add that all up and you've got the makings of a seriously incredible series, which leaves me conflicted because I want to scream READ THIS BOOK NOW, but then you'll be stuck waiting with me. But hey, misery loves company right? So let me know when you read it and we can commiserate about the excruciating wait. Probably over cupcakes. Because cupcakes make even the most painful wait, bearable.