With my love for glitter and the word awesome, it should come as no surprise that I was all about THE IMPOSSIBLE FORTRESS. Set in the 1980s, and centered around a crew of three, fourteen-year-old boys who do everything they can to get their hands on a Playboy magazine, I was ten kinds of please let me read this! It was a positive joy to read, and I can't frickin' wait to tell you all about it. 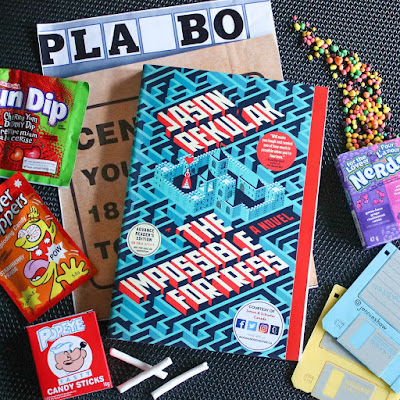 A dazzling debut novel—at once a charming romance and a moving coming-of-age story—about what happens when a fourteen-year old boy pretends to seduce a girl to steal a copy of Playboy but then discovers she is his computer-loving soulmate.
Billy Marvin’s first love was a computer. Then he met Mary Zelinsky.
Do you remember your first love?
The Impossible Fortress begins with a magazine…The year is 1987 and Playboy has just published scandalous photographs of Vanna White, from the popular TV game show Wheel of Fortune. For three teenage boys—Billy, Alf, and Clark—who are desperately uneducated in the ways of women, the magazine is somewhat of a Holy Grail: priceless beyond measure and impossible to attain. So, they hatch a plan to steal it.
The heist will be fraught with peril: a locked building, intrepid police officers, rusty fire escapes, leaps across rooftops, electronic alarm systems, and a hyperactive Shih Tzu named Arnold Schwarzenegger. Failed attempt after failed attempt leads them to a genius master plan—they’ll swipe the security code to Zelinsky’s convenience store by seducing the owner’s daughter, Mary Zelinsky. It becomes Billy’s mission to befriend her and get the information by any means necessary. But Mary isn’t your average teenage girl. She’s a computer loving, expert coder, already strides ahead of Billy in ability, with a wry sense of humor and a hidden, big heart. But what starts as a game to win Mary’s affection leaves Billy with a gut-wrenching choice: deceive the girl who may well be his first love or break a promise to his best friends.
At its heart, The Impossible Fortress is a tender exploration of young love, true friends, and the confusing realities of male adolescence—with a dash of old school computer programming.

There's a significant possibility that you've seen this book already, because it came out yesterday, and if that's the case, you're probably all: What the heck is this cover, Jennie? It's not even almost like the one at the bookstore. 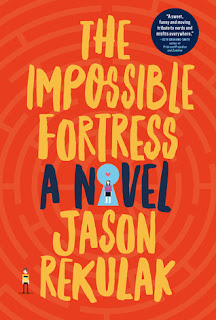 Well, I was lucky enough to get an ARC of THE IMPOSSIBLE FORTRESS, and the cover changed between when I received the book, and when it was published. I didn't double-check before embarking on the most challenging cover mani of my entire life (OMG 90-degree angles and detail overload), and it turns out the joke was on me because the actual cover has a much less intricate design. Anyway, since I spent the better part of a day trying to freehand all the maze insanity, I wasn't about to redo it. Also, I ran out of matte top coat and my supplier was out too, which is why the cover and nails aren't in the same finish. So if you really think about it, this was an impossible mani, and in that case, it actually matches perfectly. Haha!

Okay, now that I've gotten that out of the way, on with the review! 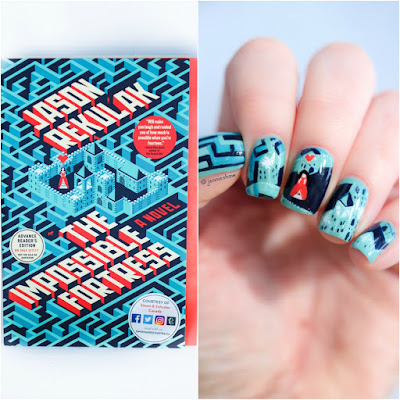 This book was a fun, quick read, and if you know anything about 80s computer programming, you're going to be in heaven. Each chapter started with a bit of code, which made me giggle because it reminded me of when I'd watch my dad. For the record, I never understood what he was doing, but I still enjoyed being a small part of the process, which was basically eating Cheetos and not touching any of his equipment. Haha!

However, even though I don't have experience in vintage computer gaming, I do remember quite a bit about the decade. Pop-Tarts and neon colours and Bagel Bites, oh my! Rekulak got each one dead-on, so the setting became its own character, arguably my favourite.

I say arguably, because the three boys, Billy (Will), Alf (yes, like the alien), and Clark were endearing in their own weirdo ways. As supporting characters, Alf and Clark added a lot of fun to the plot, but Billy represented the rare teenage boy who's willing to act in a way that separates him from the pack. This is a boy who doesn't back down, even when he's terrified (actually, he did succumb to peer pressure at times, but hey, who doesn't? 😉). And that, my friends, made me like him from the very first chapter. 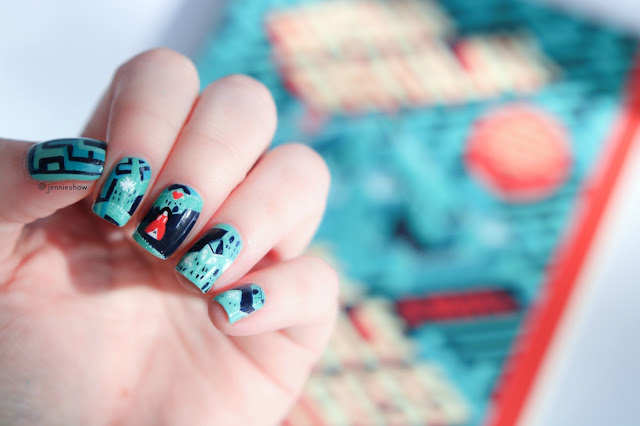 In between the Playboy quest and comedic, teenage-boy quips (mostly by Alf), THE IMPOSSIBLE FORTRESS offered a tale that seemed simple at first, and then became unbelievably complicated. As a reader, I could sense danger on the horizon. But the kids, like any normal teens, didn't share that foresight. Their determination didn't account for negative outcomes while my adult brain was all uh oh, spaghettio. As such, I found my anxiousness building, confident the bottom would fall out but not sure when it would happen. Kind of like watching a car with no brakes roll backwards down the hill. I knew it'd be bad, and the only question was how bad. Well let me tell you. It was bad. Like, car-rolled-into-a-Pop-Rocks-factory-and-exploded, kind of bad.

That said, THE IMPOSSIBLE FORTRESS is a book that makes you feel good. Yes, there were ups and downs, but at the end, the simultaneous story lines created a warm and fuzzy experience. I laughed, teared up, and ultimately felt uplifted. So if you're into a trip down memory lane that'll give you lots of positive feels (along with a few points of stress-eating tension) THE IMPOSSIBLE FORTRESS is for you! It was released yesterday, Feb 7, so find it at a bookstore near you! And if you're on Goodreads, there's a giveaway happening right now, up until Feb 21st. Woot!


Thanks to Simon & Schuster Canada for sending me this ARC! (Which in no way affected my review; you know I keep it real!)

Thin striping brush, piCture pOlish nail art brush no 9, and all the patience I possessed.