I've been working my way through the backlog of ebooks on my Kindle, and last week, it was time for SIMON VS. THE HOMO SAPIENS AGENDA. Holy awesome book alert, people!! I laughed, teared up, and finished with a song in my heart. Gah! I loved it so much!


*stops hugging book in order to display the cover* 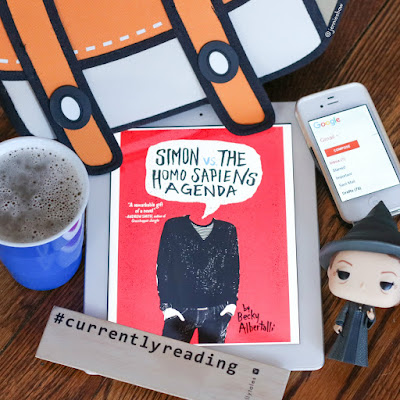 Sixteen-year-old and not-so-openly gay Simon Spier prefers to save his drama for the school musical. But when an email falls into the wrong hands, his secret is at risk of being thrust into the spotlight. Now Simon is actually being blackmailed: if he doesn’t play wingman for class clown Martin, his sexual identity will become everyone’s business. Worse, the privacy of Blue, the pen name of the boy he’s been emailing, will be compromised.

With some messy dynamics emerging in his once tight-knit group of friends, and his email correspondence with Blue growing more flirtatious every day, Simon’s junior year has suddenly gotten all kinds of complicated. Now, change-averse Simon has to find a way to step out of his comfort zone before he’s pushed out—without alienating his friends, compromising himself, or fumbling a shot at happiness with the most confusing, adorable guy he’s never met.
___


Simon's voice was probably my favourite part of SIMON VS. THE HOMO SAPIENS AGENDA. Articulate and upbeat, wry and insightful, Simon captured my attention right away. Like most interesting people, he wasn't perfect, and his endearing mix of confident insecurity made him supremely relatable. Coming out is no easy feat. Being a teenager is hard enough without worrying about sexual identity proclamations and yet, I never lost faith that Simon would get through. Battered and bruised perhaps, but he'd make it.

That said, I was still nervous as hell for him. There wasn't a lot of "action" in this book, but a ticking clock, in the form of Martin's blackmailing, created a sense of urgency. Even when Simon played it cool, he remained aware of the stakes--that he was at the mercy of another person--and his behaviour fell in line, despite Simon's reluctance. Ugh. Martin was the worst*! 👎


*Look, I get that Martin's character was also a teenager and he deserves some sympathy for his decisions, but he was still the worst. Understandably the worst, but the worst, nonetheless. 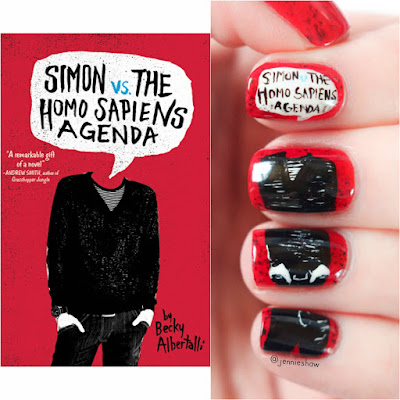 Along with the central blackmail conflict via Martin aka Monkey's Asshole (Simon's nickname, not mine, although I whole-heartedly agree 😏), Simon also had to deal with typical social problems. Namely, jealousy, the trickiest of all emotions. But in between setting friendships on fire and tossing water on others, Simon fell more and more in love with his maybe-boyfriend, Blue. OMG, guys, it was legit the cutest thing ever! I remember a time when I emailed like crazy with my now-hubs, and reading Simon and Blue's exchanges brought me back. There's something special about writing versus talking. It allows the time to reflect before answering, lessoning the chance of an awkward moment. Simon's personality was so charming in those emails, it was no wonder that Blue fell under his spell. Like, is there a SIMON RULES t-shirt I can order? Haha! 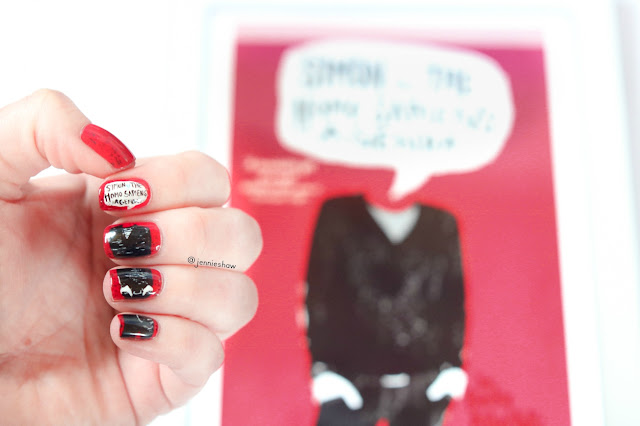 So, in sum, you need to read this book, especially if you're feeling a little blue (see what I did there? 😆). There's romance, mystery, and in the end, you'll have a huge smile on your face, along with a few happy tears. Yup. This one's a must-read. And when you do get around to reading it (doitnowdoitnow), have a box of Oreos on hand. Also, Reese Peanut Butter Cups. At times, they're discussed at length and you'll definitely want to eat some. They're the perfect companion for this delicious book.

(OMG I just checked out Becky Albertalli's Twitter and SIMON is going to be made into a movie!!!! I AM FREAKING OUT. Here's all the info (but there are spoilers, so beware): http://beckyalbertalli.tumblr.com/post/156223996311/simon-vs-the-homo-sapiens-agenda-movie-meet-the)