I'm the sort of person who loves to make a list. Whether it be for cleaning the house, getting tax info together or planning a party, when all the boxes are checked, I ride that wave of endorphins like a majestic dolphin. In addition to being on Goodreads, I'm also part of the 50 Book Pledge. The two sites are similar, being they both help me keep track of the books I've read, while also seeing what my friends are up to, but the 50 Book Pledge has a major difference. Badges. Not every book has a badge, but some do. The site has a list of them. *glances back to the first sentence of this paragraph*

That's how I came to pick up THE LONELY HEARTS HOTEL. Because I wanted the badge (alllllll the badges, actually, haha!). It took me a little longer to read, due to the heart-hurting sadness, but it was also a phenomenal story and I'm excited to tell you about it. 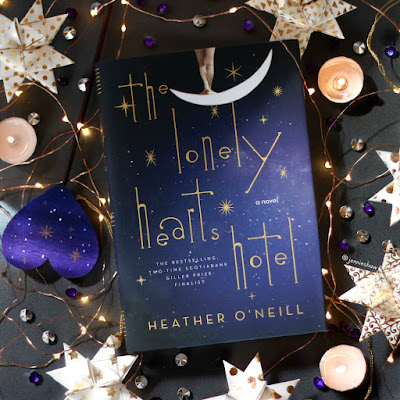 With echoes of The Night Circus, a spellbinding story about two gifted orphans in love with each other since they can remember whose childhood talents allow them to rewrite their future. The Lonely Hearts Hotel is a love story with the power of legend. An unparalleled tale of charismatic pianos, invisible dance partners, radicalized chorus girls, drug-addicted musicians, brooding clowns, and an underworld whose economy hinges on the price of a kiss. In a landscape like this, it takes great creative gifts to thwart one's origins. It might also take true love.Two babies are abandoned in a Montreal orphanage in the winter of 1910. Before long, their talents emerge: Pierrot is a piano prodigy; Rose lights up even the dreariest room with her dancing and comedy. As they travel around the city performing clown routines, the children fall in love with each other and dream up a plan for the most extraordinary and seductive circus show the world has ever seen. Separated as teenagers, sent off to work as servants during the Great Depression, both descend into the city's underworld, dabbling in sex, drugs and theft in order to survive. But when Rose and Pierrot finally reunite beneath the snowflakes after years of searching and desperate poverty the possibilities of their childhood dreams are renewed, and they'll go to extreme lengths to make them come true. Soon, Rose, Pierrot and their troupe of clowns and chorus girls have hit New York, commanding the stage as well as the alleys, and neither the theater nor the underworld will ever look the same.With her musical language and extravagantly realized world, Heather O'Neill enchants us with a novel so magical there is no escaping its spell.
__


It shouldn't have been a big shocker that a book set during the Great Depression, involving orphans, would be sad but wow, was THE LONELY HEARTS HOTEL ever sad. Like, I-don't-know-if-I-can-continue kind of sad. Yes, there were glimpses of how strong the human spirit can be, but it was also heartbreaking.

Side note: why aren't nuns the nicest people ever? I mean, they work for the Big Guy Upstairs, but aside from Maria and Mary Clarence, I have yet to read about a warm and cuddly nun (plus, I'm not sure that Mary Clarence even counts, which means Maria is the only one). They're mostly brutal disciplinarians who don't seem to like children in the slightest, and some are downright abusive. Who on earth put those sorts of nightmares in charge of children?!

Anyway, as you can tell from my side note, the nuns in charge of Rose and Pierrot's orphanage are not of the Maria variety, which made their childhood extremely difficult to read. But the good news is their horrific childhoods served as a launching point for the two entertainers, and it had me rooting for them to a degree that bordered on painful. Because OMG, they deserved a better life. 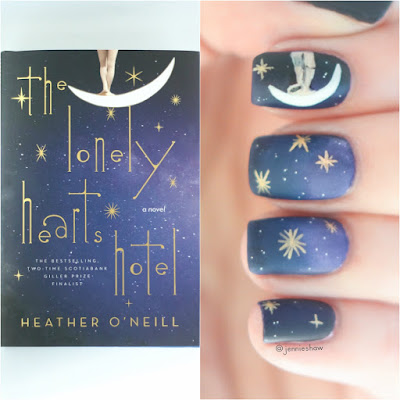 As the book continued, it didn't get much better. I mean, the awful nuns were gone, but Rose and Pierrot's lives were still filled with tragedy. If it weren't for the tiny flickers of hope (and the badge, haha), I would've put THE LONELY HEARTS HOTEL in my DNF pile. I mean, my heart can only take so much. However, there was another component of the book that kept my interest: the writing. Although heavy on the metaphors and similes, O'Neill created a magical, whimsical tone:

"On the front arch of an old abandoned bank there was a gargoyle of an angel lying on its back, looking up at the clouds in the sky, having lost complete interest in the world." <-- I mean, come on. A gargoyle is suddenly super interesting. That's some crazy-good writing.

Through death, drug addiction, prostitution, rape, miscarriages, and violence (a lot of violence), Rose and Pierrot remained somewhat detached. If you watch/have read The Magicians, there's a part of the heart--the one that holds pain, grief, and most of one's conscience-- called "shade." For me, Rose and Pierrot didn't have their shade. They went through life numb, to a degree. The world greeted them with agony, so they became accustomed to it. That was probably the saddest part of all, for me. However, I didn't pity Rose and Pierrot. Quite the contrary, I admired them. Chasing your dreams, no matter how many detours you take along the way and how many times you're told to forget them, is a quality that few possess. Despite every obstacle, those two kids reached for the stars. 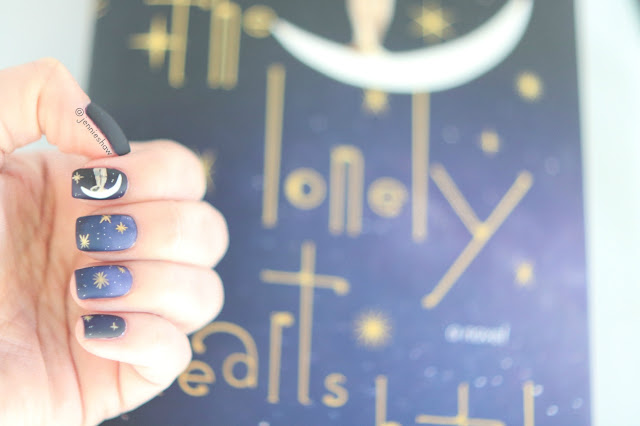 So look, you may be wondering how the heck I can recommend this book to others, because it's such a downer. Frankly, I'm surprised myself, as I tend to stay away from novels like THE LONELY HEARTS HOTEL. It's graphic, in every possibly way, and despite what other reviews have said, I don't agree that fans of THE NIGHT CIRCUS would be into THE LONELY HEARTS HOTEL, but if you're looking for a book that challenges the way you see the world--that tears the blinders from your heart and shows you a human experience you'd rather believe doesn't exist--then this is the book for you. But, uh, have something super light and fun locked and loaded for afterwards. Trust me.

China Glaze - Queen B and The Outer Edge

ORLY - Wild Wisteria and Charged Up