With spring doing its best to chase winter away, it's the perfect time for a book like MISS YOU to come into the world. I mean, have you ever seen such a cheery collection of colours on a cover? Fun fact: this cover required the most nail polish I've used for a mani, coming in at a whopping 28 (and even more because I mixed a few custom colours). The intricate nature of the design proved to be quite the challenge, but it was all worth it because MISS YOU is a must read. 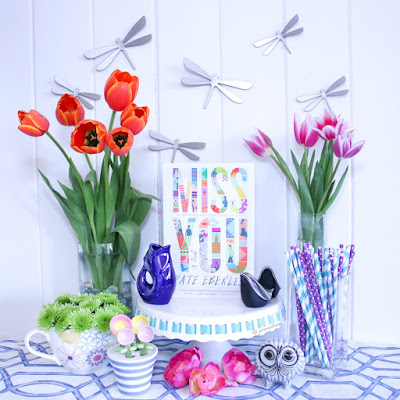 Tess and Gus are meant to be. They just haven't met properly yet. And perhaps they never will . . .

Today is the first day of the rest of your life is the motto on a plate in the kitchen at home, and Tess can't get it out of her head, even though she's in Florence for a final, idyllic holiday before university. Her life is about to change forever - but not in the way she expects.

Gus and his parents are also on holiday in Florence. Their lives have already changed suddenly and dramatically. Gus tries to be a dutiful son, but longs to escape and discover what sort of person he is going to be.

For one day, the paths of an eighteen-year-old girl and boy criss-cross before they each return to England.

Over the course of the next sixteen years, life and love will offer them very different challenges. Separated by distance and fate, there's no way the two of them are ever going to meet each other properly . . . or is there?
___

Minor Bias Disclaimer: I have a personal connection to MISS YOU's premise because my hubs and I grew up in the same area, but never met until we were in our twenties. We often say that if we'd met any earlier, we wouldn't have liked each other very much (we actually think we would've hated each other 😂), so I was interested to see how MISS YOU tackled the topic of having to meet a person at the exact right time in order for them to connect. Unfortunately, things started off on a sad note when Tess and Gus found themselves overcoming major, life-changing obstacles they hadn't anticipated. Both ended up making sacrifices for their respective families and for the most part, they were ignored and taken for granted. Like most people who aren't seen for who they are--who live in the shadows of others--Tess and Gus became resentful, which trickles into most of the decisions they make. At times, that made them kind of unlikable. I mean, I've felt my fair share of resentment along the way, and its toxicity is hard to manage, but understanding their motivations didn't mean I supported their actions. But MISS YOU is more than two separate stories, because the whole time Tess and Gus navigated their ways through choppy waters, they were unknowingly rotating around each other like two boats lost at sea.

The almost-encounters continued for sixteen years and I never knew when another would happen, but when it did, there was always a POV switch. Eberlen created full scenes, bursting with descriptions, which both characters described from their own perspective. The overlapping details--what felt important to each character--were some of my favourite parts. And without fail, whenever the POV shifted, my breath would catch in my throat, wondering if it was the day they'd meet. Each time they missed each other, my growing anticipation kept the tension high, which was good because there were moments when Gus, in particular, was hard to sympathize with. I did, though, because all he really wanted was to be happy. He wanted it so badly he ached. Tess was the same way. Through the ups and the downs, blocked by family responsibilities and hurt feelings, they were desperate for love. Oh, my heart when were they going find it?!

But at some point in every adult's life, there comes a point when you need to take accountability for your actions, and that's when I really started to root for Tess and Gus. They both recognized the source of their unhappiness and slowly but surely began to put the past to bed. Starting over when you're in your thirties is scary, but it's scarier to stay stuck. In the end, these were a pair of very real characters who took a winding pathway to find themselves. Eberlen did a stellar job demonstrating that in order to love another person, you have to love yourself. The ending was a bit rushed, but still totally satisfying. So if you want to read a non-traditional romance with a dash of European travel, this is the book for you!!

Huge thanks to Harper Collins Canada for sending me a copy for review!


As I already told you, this mani required 28 polishes so get ready for a huge list. Haha!

OPI - Towel Me About It, Fearlessly Alice, My Twin Mimmy, Need Sunglasses?, I Am What I Amethyst, In My Back Pocket, Gargantuan Green Grape, Tiramisu for Two, Suzi Has A Sweet Tooth,  A Good Man-Darin is Hard to Find, Do You Lilac It?, Mod About You, and matte top coat

China Glaze - At Vase Value, Too Yacht To Handle, Trip of a Lime Time, Def Defying, Boho Blues, and Mix and Mingle.