book review and cover mani: her every fear

Clutch your pearls to your throats, people, because I have a bananapants thriller to tell you about. In order to properly convey my love, this review will have GIFs. First, because it's the sort of book review where I can't talk about specifics, but more importantly, because I loved HER EVERY FEAR so much that words alone won't suffice. 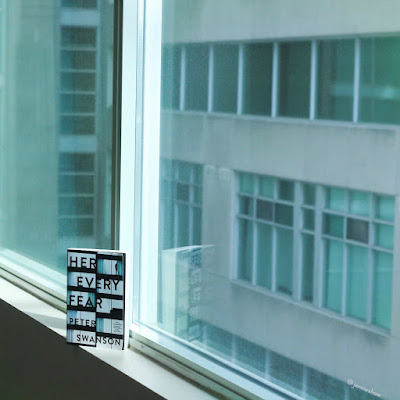 Growing up, Kate Priddy was always a bit neurotic, experiencing momentary bouts of anxiety that exploded into full-blown panic attacks after an ex-boyfriend kidnapped her and nearly ended her life. When Corbin Dell, a distant cousin in Boston, suggests the two temporarily swap apartments, Kate, an art student in London, agrees, hoping that time away in a new place will help her overcome the recent wreckage of her life.
Soon after her arrival at Corbin’s grand apartment on Beacon Hill, Kate makes a shocking discovery: his next-door neighbor, a young woman named Audrey Marshall, has been murdered. When the police question her about Corbin, a shaken Kate has few answers, and many questions of her own—curiosity that intensifies when she meets Alan Cherney, a handsome, quiet tenant who lives across the courtyard, in the apartment facing Audrey’s. Alan saw Corbin surreptitiously come and go from Audrey’s place, yet he’s denied knowing her. Then, Kate runs into a tearful man claiming to be the dead woman’s old boyfriend, who insists Corbin did the deed the night that he left for London.
When she reaches out to her cousin, he proclaims his innocence and calms her nerves--until she comes across disturbing objects hidden in the apartment and accidentally learns that Corbin is not where he says he is. Could Corbin be a killer? What about Alan? Kate finds herself drawn to this appealing man who seems so sincere, yet she isn’t sure. Jet-lagged and emotionally unstable, her imagination full of dark images caused by the terror of her past, Kate can barely trust herself, so how could she take the chance on a stranger she’s just met?

So, yeah. I'm going to start by throwing down a fact: Peter Swanson is basically the Roger Federer of misdirection. Every time I thought things were going right, they veered left...and then flipped backwards and upside down. I swear it only took five chapters for my face to do this:

Which quickly lead to this:

Like, I literally paused and said, "whoa." Aloud. To myself. At about the halfway mark, I started planning out my mani, because unless the book spontaneously combusted, along with every other copy in existence, meaning I would be forever bitter from not finding out how it ended, I'd give it five stars. That rarely happens. Also rare? I actually painted this mani twice, because the first time, I wasn't satisfied with my linework. Yes, I loved this book so much that I wanted my tribute to be as good as it could be. I have never done two manis before (because they take forever). That alone should tell you how good HER EVERY FEAR is. Like, do you even need to keep reading this review? 😉 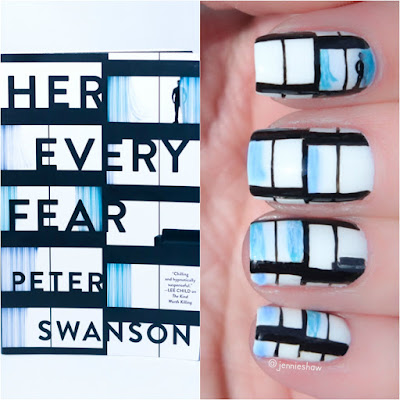 The second mani (because no way I'm showing you the first).
Cover design by William Ruoto.


There are many novels nowadays that straddle literary and commercial, and I think HER EVERY FEAR is a great example, although it's more like 60/40 on the literary side. Err...maybe 70/30. No. Let's go with 65/35. Haha!

I want to address that because in the interests of keeping it real, I wasn't too keen on the first chapter. There was something slightly condescending about the tone that irked me (which I sometimes find with more literary novels). I ended up putting the book down, in favour for another, but it stayed on my nightstand. I picked it back up about a month later, willing to give it another chance...and proceeded to stay up an extra hour to read. Once I got into it, the voice softened (but remained quite sharp) and my face began its journey of escalating expressions of shock. So if you're not quite sure about the first chapter, trust me. You need to keep reading. 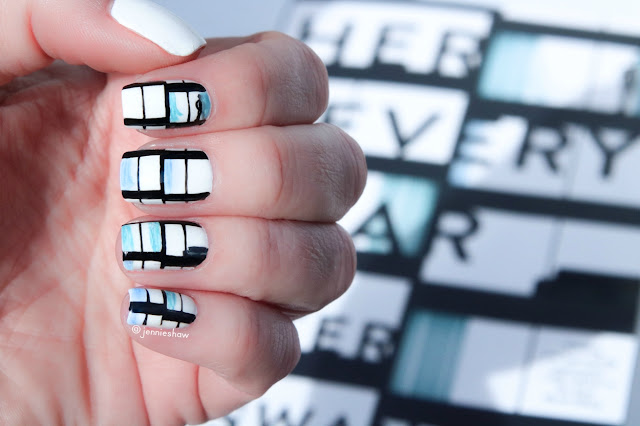 In conclusion, it should come as no surprise that HER EVERY FEAR is getting a must read stamp from me. The book got better and better, each character was completely unpredictable, and my head is still spinning from all the craziness. Just buy it, people. Buy it now!