review and cover mani: the weight of lies

Last month, Emily Carpenter reached out to me, asking if I'd like an ARC of her sophomore novel: THE WEIGHT OF LIES. Earlier this year, I read Carpenter's debut and loved it, so this was my reaction:

I started reading on Saturday night, snuck in chapters throughout Sunday (when we had company) and then stayed up until midnight in order to finish. Because I burned through this bananapants mystery within 24-hours, it should come as no surprise that THE WEIGHT OF LIES gets my must-read recommendation, and I'm super psyched to use the rest of this post to convince you of its awesomeness. 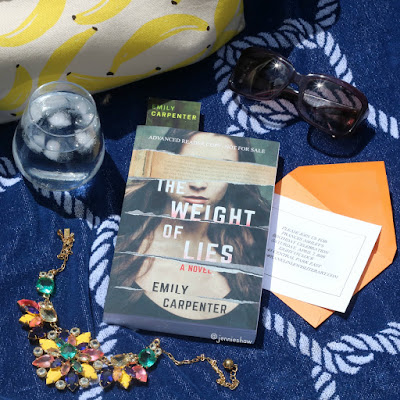 Reformed party girl Meg Ashley leads a life of privilege, thanks to a bestselling horror novel her mother wrote decades ago. But Meg knows that the glow of their very public life hides a darker reality of lies, manipulation, and the heartbreak of her own solitary childhood. Desperate to break free of her mother, Meg accepts a proposal to write a scandalous, tell-all memoir.

Digging into the past—and her mother’s cult classic—draws Meg to Bonny Island, Georgia, and an unusual woman said to be the inspiration for the book. At first island life seems idyllic, but as Meg starts to ask tough questions, disturbing revelations come to light…including some about her mother.

Soon Meg’s search leads her to question the facts of a decades-old murder. She’s warned to leave it alone, but as the lies pile up, Meg knows she’s getting close to finding a murderer. When her own life is threatened, Meg realizes the darkness found in her mother’s book is nothing compared to the chilling truth that lurks off the page.


Oh em gee, folks, there are so many things I loved about THE WEIGHT OF LIES that it's a challenge to figure out where to start. The dysfunctional mother-daughter relationship? Bonny Island's creeptastic vibes? Meg's ability to be a sad-sack and also fearless? The murder that may or may not have happened? How do I choose?! 
Okay. Let's start with Meg, because she's the protagonist and first-person narrator. I didn't instantly like her, mostly because in the first chapter, Meg's sitting by the side of a swanky hotel pool in Las Vegas, feeling sorry for herself. She lives off a trust fund, has friends named Aurora and "the Glitter Girls," and receives a hand-delivered birthday party invitation from her mother. Like, come on. Hand delivered?! *eye roll* But Meg's reaction to that invitation is what changed my initial opinion. Her outer layer shed, revealing her vulnerable core. Just like that, she let me in. She put up walls to protect herself from others, but not from me, the reader. So from the third chapter forward, I was Meg's fiercest cheerleader.

The setting was probably my second favourite element of THE WEIGHT OF LIES. Carpenter s-l-a-y-e-d the unsettling and mysterious Bonny Island, and like in BURYING THE HONEYSUCKLE GIRLS, the atmosphere was crucial to the plot. When an author can create a threatening environment--a force that demands respect--it automatically adds tension. Running in fear is one thing, but running in fear through hostile and unstable terrain, where danger lurks in every tree and meadow, it's down-right terrifying. And holy hotcakes, is Bonny Island a nightmare. 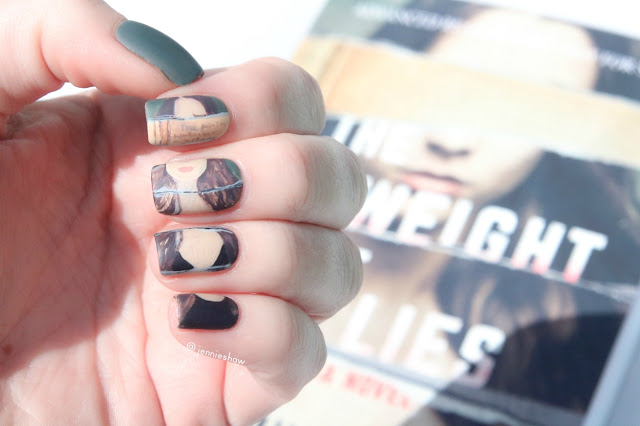 Then there's the dysfunctional relationship. THE DYSFUNCTION I CANNOT. Meg and Frances were like opposing magnets. Any attempts to bring them together were strained and explosive. And it only got worse as the novel progressed. The plot itself had a killer pace (haha, had to do it) and doesn't unfold in a linear fashion, which made it extra awesome. Also awesome? There were excerpts of Frances' horror novel at the beginning of each chapter, syncing the fictional novel with the real one. So it's firing on all levels, folks. ALL. LEVELS. Oh, and have I mentioned there's some super cute male eye candy? Because there is. And he was delicious.

If you love mysteries that feature volatile characters, cold cases, and gripping plots, you need to read THE WEIGHT OF LIES. And then BURYING THE HONEYSUCKLE GIRLS. Because there's a new heavyweight in atmospheric mysteries, and her name is Emily Carpenter.

THE WEIGHT OF LIES comes out next Tuesday, June 6th. Mark your calendars, people!!

OPI - Alpine Snow, In My Back Pocket, Chicago Champagne Toast, My Twin Mommy, You Don't Know Jacques, Towel Me About It, and matte topcoat

Fingerpaints - Black Expressionism and Sketch Me