If you’re a writer, you’re probably aware of the idea that you should chase your MC up a tree…and then throw rocks at them for approximately three hundred pages. THE LAST NAMSARA is a perfect example of how to do that, because nothing was easy for Asha. Nope. I’d even propose that Ciccarelli enjoyed throwing rocks at her poor heroine, as they came from every possible direction: rocks from family, sense of self, destiny, and romance. And the culmination of those rocks—boulders, actually—made for a heart-jammering, gasp-inducing, book-dropping good time. 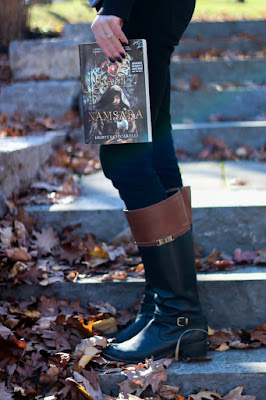 *Surprise! The final version of THE LAST NAMSARA has a different cover than the ARC, which you'll see down below.

In the beginning, there was the Namsara: the child of sky and spirit, who carried love and laughter wherever he went. But where there is light, there must be darkness—and so there was also the Iskari. The child of blood and moonlight. The destroyer. The death-bringer.

These are the legends that Asha, daughter of the king of Firgaard, has grown up learning in hushed whispers, drawn to the forbidden figures of the past. But it isn’t until she becomes the fiercest, most feared dragon slayer in the land that she takes on the role of the next Iskari—a lonely destiny that leaves her feeling more like a weapon than a girl.

Asha conquers each dragon and brings its head to the king, but no kill can free her from the shackles that await at home: her betrothal to the cruel commandant, a man who holds the truth about her nature in his palm. When she’s offered the chance to gain her freedom in exchange for the life of the most powerful dragon in Firgaard, she finds that there may be more truth to the ancient stories than she ever could have expected. With the help of a secret friend—a slave boy from her betrothed’s household—Asha must shed the layers of her Iskari bondage and open her heart to love, light, and a truth that has been kept from her.

I’m always drawn to YA fantasy because the action gets going fairly quickly. THE LAST NAMSARA absolutely slayed in that regard (😆) but even better, the action never stopped. The moment one problem was solved, two more appeared—a Hydra of escalating bombshells, if you will. At one point, I thought I needed to get my asthma inhaler because the intensity squeezed my throat to the point I worried about passing out. And in the middle of it all stood Asha, the legendary dragon slayer and newly-appointed Iskari. 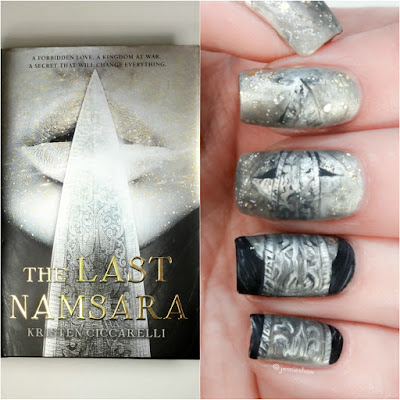 Asha’s determination and unrelenting nature endeared herself to me immediately, and her arc was fascinating to watch. Asha was pushed to her limit in THE LAST NAMSARA, and the pushing didn’t stop even when she teetered on the edge of an abyss. A metaphorical abyss of course, because I’d never include a real spoiler. Haha! Asha never backed down from a challenge and instead, looked it dead in the eye and cocked two fingers forward, daring whatever obstacle lay in her path to strike first. Think Katniss but more badass and tortured (yes, that’s actually possible).

Also, there are dragons. Did I mention that? DRAGONS, PEOPLE. And while I don’t often find dragons in my reading adventures, I’m kind of wondering why that’s the case because dragons are freaking awesome. Tied in with the dragons, the world building itself proved to be exquisite, lush, and fairly straight-forward for its magnitude—a plus for me because I can get lost. 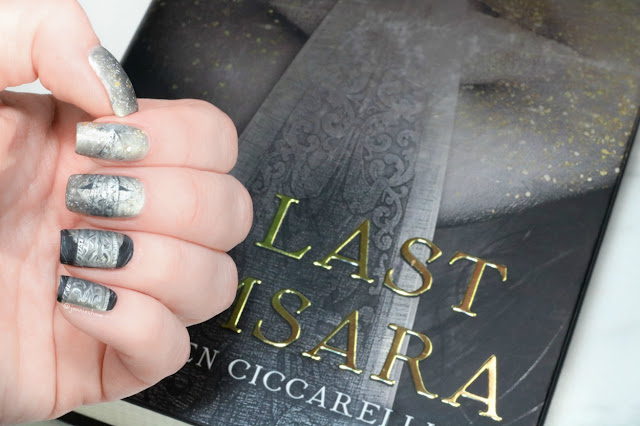 Most importantly, I want to note that Kristen Ciccarelli is Canadian and grew up on her grandfather’s grape farm so I’m unsure how this novel could possibly get any better. Buy it now, people! I did, even though I already had an advanced copy, but as you know the cover changed for publication and I needed this beauty to adorn my bookshelf. So for real, if the fact that I now have two copies of this novel because my love required it doesn’t convince you to dive into THE LAST NAMSARA, I don’t know what will. OMG get to your bookstores, friends! And considering it's Black Friday, you can probably find a sweet deal. Get going!

Enormous thanks to HCC Frenzy and HarperCollins Canada for giving me an ARC!