A few weeks ago, I saw Stephen King and Owen King speak about their recent collaborative novel, SLEEPING BEAUTIES. To call it an awesome night would be a hideous understatement. I’ve been a fan of Stephen King for a long time, which is hilarious because I don’t really like being scared, but my desire for immersive, killer (haha) stories means I’ve read a lot of his titles. Each ticket to the event included a hardcover copy of the book and I was lucky enough to snag a signed copy, which doesn’t really have much to do with my review but WOOOOT!! Haha! 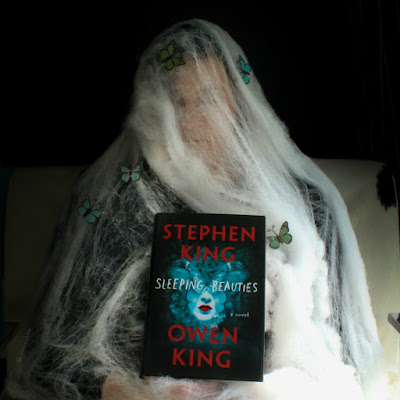 Taking this pic was so.much.fun.

In a future so real and near it might be now, something happens when women go to sleep; they become shrouded in a cocoon-like gauze. If they are awakened, if the gauze wrapping their bodies is disturbed or violated, the women become feral and spectacularly violent; and while they sleep they go to another place. The men of our world are abandoned, left to their increasingly primal devices. One woman, however, the mysterious Evie, is immune to the blessing or curse of the sleeping disease. Is Evie a medical anomaly to be studied, or is she a demon who must be slain?

One of the reasons I love Stephen King’s writing is because he never holds back and in the most gloriously feminist way, nobody is off limits. Nope, there’s nothing sacred about women in King’s novels, that’s for sure, and it’s just the best. That couldn’t be more the case with SLEEPING BEAUTIES. But it turns out that Stephen King didn’t come up with the idea; it was his son, Owen. 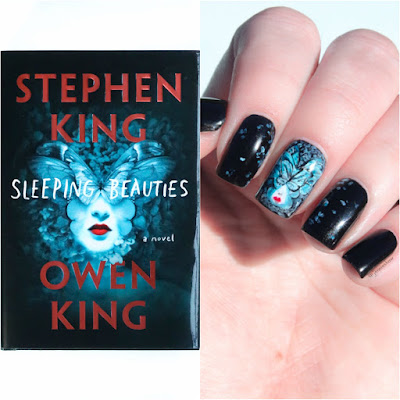 I know this because as I previously wrote, I managed to get tickets for the Toronto stop on their book tour. The way Stephen and Owen described their collaboration was unlike anything I’d ever heard, each writing pieces of a chapter and then handing it back and forth--a true collaboration. They said the result was a piece of work that didn’t really sound like either of them. At the time, I couldn’t understand how that was possible, but now that I've read the book, it’s true. So while there were typical trademarks of Stephen’s writing: sparing (to no) use of adverbs, rich sensory details, and unreliable characters, the voice was wholly unique. So cool, right?

All that is good and well, kind of what you'd expect from to literary powerhouses, but the part that I loved most about SLEEPING BEAUTIES was Evie. *inserts heart eyes* Mysterious and strong, violent and playful, Evie was a kaleidoscope of awesome pieces, all working together in surprising harmony, and she stole every scene she was in. Learning about her purpose kept me turning pages because I knew that whenever she appeared, shit was about to get real. And I dig that about a character! 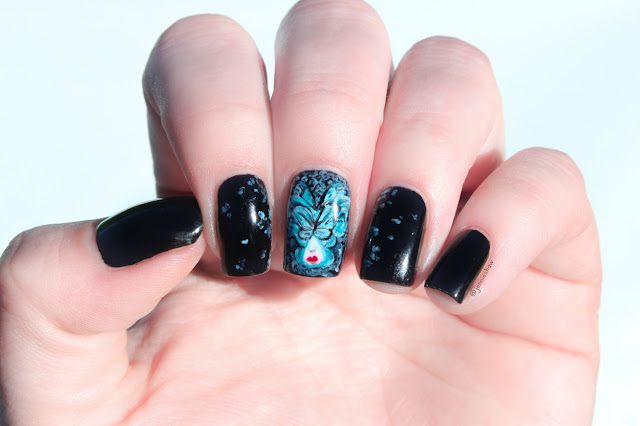 The length of SLEEPING BEAUTIES may make you hesitate (a whopping 702 pages) and while I think some cuts could’ve been made, the story operates on a 360 degree swivel, digging into the nitty-gritty of the sleeping virus phenomenon. This next part may seem like a spoiler even though it’s on the back jacket of my copy (not sure why the GR one is different) but there’s also more than one storyline, which added extra areas to be fleshed out and examined. I feel that’s why the pace meandered at times, because there were some characters I didn't care to know much about, but even with the slower bits, it’s clear that storytelling genes are rich in the King household. The subject matter is timely, provocative, and well executed, so if you're into science fiction/fantasy, make sure you pick up a copy!

China Glaze – Wait N Sea and My Way Or The Highway