review and cover mani: not a drop to drink

NOT A DROP TO DRINK is the third Mindy McGinnis novel I’ve read since October so I guess it’s safe to say that I’m a fan. I love that her protagonists aren’t terribly likable, and her sharp observations have me nodding my head more times than not. In the case of NOT A DROP TO DRINK, Lynn is the softest progatonist yet, but since I’m comparing her against Alex and Sasha, that doesn’t mean she’s actually soft. Just less intense. But where Lynn lacked in that regard, her situation made up for it. So let’s get to the review! 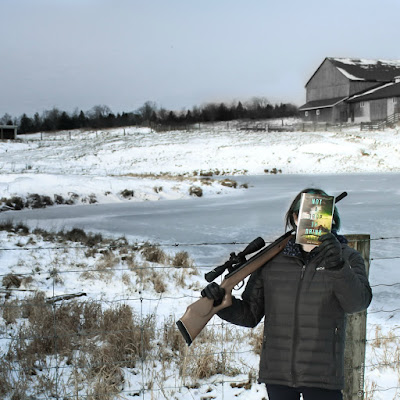 Regret was for people with nothing to defend, people who had no water.

Lynn knows every threat to her pond: drought, a snowless winter, coyotes, and, most importantly, people looking for a drink. She makes sure anyone who comes near the pond leaves thirsty, or doesn't leave at all.

Confident in her own abilities, Lynn has no use for the world beyond the nearby fields and forest. Having a life means dedicating it to survival, and the constant work of gathering wood and water. Having a pond requires the fortitude to protect it, something Mother taught her well during their quiet hours on the rooftop, rifles in hand.

But wisps of smoke on the horizon mean one thing: strangers. The mysterious footprints by the pond, nighttime threats, and gunshots make it all too clear Lynn has exactly what they want, and they won’t stop until they get it….

With evocative, spare language and incredible drama, danger, and romance, debut author Mindy McGinnis depicts one girl’s journey in a barren world not so different than our own.

I live in the country, on a property with a small pond, and we’ve had our fair share of nuisances in regards to animals trying to claim it as their own, so the premise of NOT A DROP TO DRINK had my attention. But different to me, Lynn only knows of her world—one where she must protect her water source at all costs—and novel begins with an immediate threat: wisps smoke on the horizon. I love when a book’s action starts right away but NOT A DROP TO DRINK did one better; it also brought the tension. 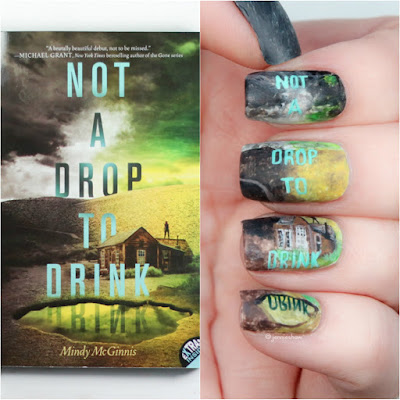 Because I understood the stakes early on, the threat of smoke in the distance put me on edge immediately. Lynn and her mother were forced to enter defense mode, but with winter growing closer ever day, there was an additional fear of spending too much time defending their pond and not enough time preparing for the colder months. A true survivalist problem if I’ve ever heard one, and I was glued to the page while Lynn and her mother made tough choices and grappled with the multiple fears ever present in their minds.

But smoke on the horizon was just the beginning of Lynn’s story and there’s far more involved than simple survival. I can’t mention any of those elements of course, but it’s become clear that my brain doesn’t operate on the same level as McGinnis’ because I never have any idea where her plots will take me. I do know, however, that it will be a wild ride. And isn’t that just the best?! 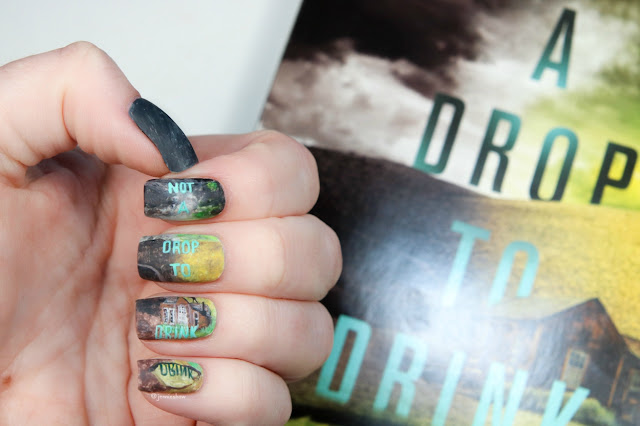 I had to take some liberties with the titles on this one, both in placement and colouring, because my first draft of lettering was super hard to read. 😊

I have one final note about NOT A DROP TO DRINK, and it's regarding the tone. Compared to the other McGinnis novels I’ve read, this one isn’t nearly as dark. Yes, there is violence, but the vibe is more thoughtful than stabby. So if you were a little intimated by the two pervious novels I’ve reviewed but still want to read an awesome book, NOT A DROP TO DRINK is an excellent choice.

Big thanks to HCC Frenzy for sending me a finished copy!

OPI – In My Back Pocket, I Just Can’t Cope-acabana, Tiramisu for Two, Stay Off The Lawn, and You Don’t Know Jacques

China Glaze – Celtic Sun and Too Yacht To Handle