I've been eagerly awaiting THE CRUEL PRINCE's release and when my OwlCrate arrived, I literally squealed with delight (as my husband can attest). Due to my love for Holly Black, I reserved an entire Saturday to read. Jk. I planned to only read three chapters with breakfast and then do a bunch of adulting...but suddenly it was the middle of the afternoon because OMG AMAZING and how did I think I could only read three chapters?! So let's get started, shall we? 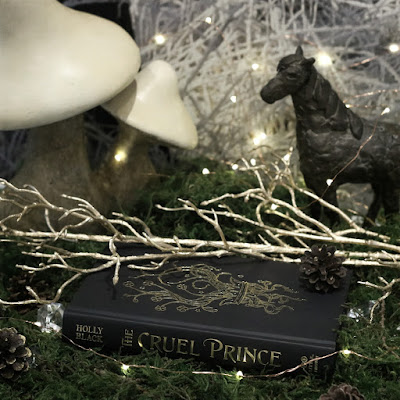 Of course I want to be like them. They’re beautiful as blades forged in some divine fire. They will live forever.

And Cardan is even more beautiful than the rest. I hate him more than all the others. I hate him so much that sometimes when I look at him, I can hardly breathe.

Jude was seven years old when her parents were murdered and she and her two sisters were stolen away to live in the treacherous High Court of Faerie. Ten years later, Jude wants nothing more than to belong there, despite her mortality. But many of the fey despise humans. Especially Prince Cardan, the youngest and wickedest son of the High King.

To win a place at the Court, she must defy him–and face the consequences.

In doing so, she becomes embroiled in palace intrigues and deceptions, discovering her own capacity for bloodshed. But as civil war threatens to drown the Courts of Faerie in violence, Jude will need to risk her life in a dangerous alliance to save her sisters, and Faerie itself.

If you've read any of Holly Black's work, you're already aware of her ability to throw down. Like, when Black writes a novel, she writes a novel. Strong, well-developed characters, a plot that won't quit, escalating tension, and too many omg moments to count are trademarks I've come to expect. All were in attendance for THE CRUEL PRINCE, only by "in attendance," I mean hopped up on pixie sticks and mayhem. I ripped through each chapter like it was the last one I'd ever read, immersed in Jude's narrative. 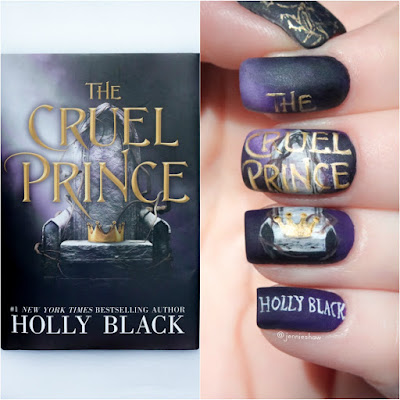 I honestly don't even know what to say because what I really want to do is tell you each and every detail, but that would make this review spoiler-central and also 370 pages long, as there wasn't one wasted moment--no chapters or character arcs that I could to summarize briefly. In fact, I'd be floored if a full synopsis of this treasure even exists. So. Much. Happens. For. Real.


And Jude. OH HOW I LOVE JUDE. A churning ball of determination, Jude refused to take no for an answer. In that way, she reminded me of my all-time favourite heroine, Anne Shirley, except for Jude's proficiency with a sword and living in Faerie, of course. But that fierce, I'll-show-you attitude and the ability to put on blinders meant that once Jude decided on an action, she never quit, and I will follow any character who convinces me they'll sacrifice everything for what they feel is right (and then stress-eat while reading about the plethora of said sacrifices). 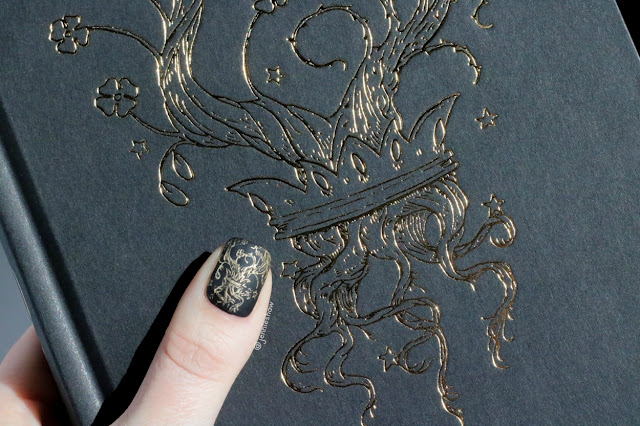 I'm obsessed with this gold inlay detailing and had to paint it. I mean, can this book get any more awesome?! NOPE.

So look, just read THE CRUEL PRINCE. Read it and bask in the divine, gruesome nature of fey royalty and the humans who get entangled in the drama. The roller coaster of insanity is so bananas that I want to crawl through the screen right now, stare deep into your eyes, and then scream at you to buy this book (only nicely and I'll probably bring cookies or a square of some sort). But that's still fairly creepy so don't make me Ring you, folks. You know I'll do it. ;)

While the cover I painted is an OwlCrate exclusive, the links here are for the standard cover.

Also, I'd like to note that this is my 100th cover mani!! I can't believe I've painted so many!! To celebrate, I'll be doing a MAJOR giveaway on Instagram, so make sure you follow me! I'll be announcing the details soon!