Last Saturday, I spent all day glued to the pages of TELL ME LIES. Holy addictive novel, friends! The unhealthy dynamic between Lucy and Stephen had me all: "Oh girrrrrrl nooooooo." But in an empathetic way, because I've been there, battling romantic feelings towards a charming person who basically treats you like shit. While Lucy and Stephen shared the narration in alternating POV chapters, this story was more about Lucy. Mostly because she was the only one capable of growth, although it pains me to say that Stephen’s voice brought this book to the next level (because yikes, what a nightmare character). 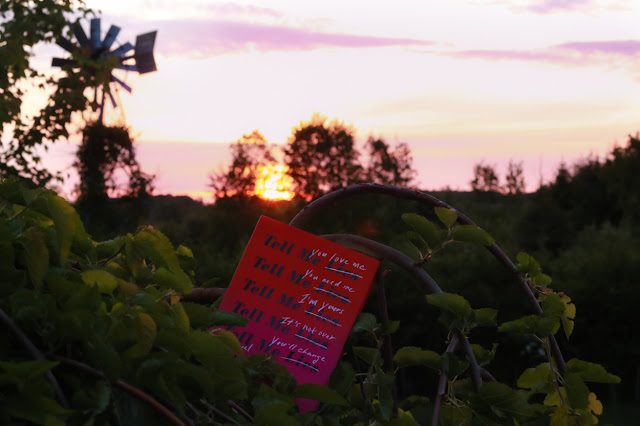 A thrilling, sexy coming-of-age story exploring toxic love, ruthless ambition, and shocking betrayal, Tell Me Lies is about that one person who still haunts you—the other one. The wrong one. The one you couldn’t let go of. The one you’ll never forget.

Lucy Albright is far from her Long Island upbringing when she arrives on the campus of her small California college, and happy to be hundreds of miles from her mother, whom she’s never forgiven for an act of betrayal in her early teen years. Quickly grasping at her fresh start, Lucy embraces college life and all it has to offer—new friends, wild parties, stimulating classes. And then she meets Stephen DeMarco. Charming. Attractive. Complicated. Devastating.

Confident and cocksure, Stephen sees something in Lucy that no one else has, and she’s quickly seduced by this vision of herself, and the sense of possibility that his attention brings her. Meanwhile, Stephen is determined to forget an incident buried in his past that, if exposed, could ruin him, and his single-minded drive for success extends to winning, and keeping, Lucy’s heart.

Alternating between Lucy’s and Stephen’s voices, Tell Me Lies follows their connection through college and post-college life in New York City. Deep down, Lucy knows she has to acknowledge the truth about Stephen. But before she can free herself from this addicting entanglement, she must confront and heal her relationship with her mother—or risk losing herself in a delusion about what it truly means to love.

With the psychological insight and biting wit of Luckiest Girl Alive, and the yearning ambitions and desires of Sweetbitter, this keenly intelligent and staggeringly resonant novel chronicles the exhilaration and dilemmas of young adulthood, and the difficulty of letting go, even when you know you should.

I had concerns about reading TELL ME LIES when the back jacket used “toxic love” to describe Lucy and Stephen’s relationship, because I thought it was a veiled way of saying “abusive.” I suppose an argument could be made to that effect, in so far as emotional manipulation, but I saw the implosion of two people who gravitated towards each other, even when it wasn't good for them. Mostly on Lucy's part, of course, because of the two, she was far more emotionally involved, which invariably meant she got hurt. Reading her POV was more of a challenge than Stephen's, because I could feel her pain and frustration—her yearning to be loved, no matter what the cost. But Stephen’s charismatic words were a siren song, each carefully constructed compliment luring Lucy deeper and deeper into dangerous waters. Choosing to believe promises over actions never ends well, and again, I’ve been there. In fact, TELL ME LIES brought up memories about my own version of Stephen, which made me tackle-hug myself* because thank goodness I figured out I deserved better.

*If you try this, make sure you're in front of a couch or other more forgiving surface because you'll propel yourself backwards and landing on your tailbone isn't a good time. *gets bag of ice* 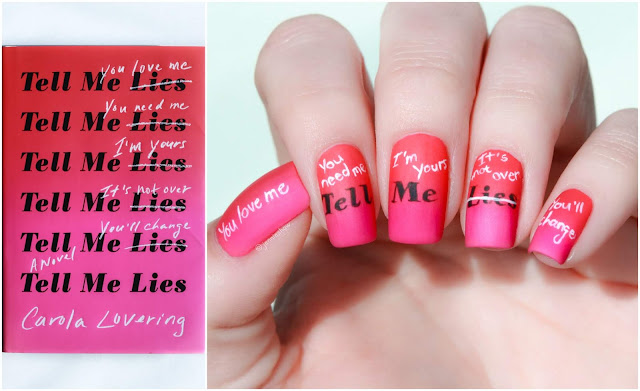 That said, Lovering NAILED Stephen's perspective, the sort of man who figures out how to manipulate another person's behaviour to his benefit, and to their detriment. Like, Lovering straight up set Stephen's POV on fire and I couldn’t stop staring at the flames. At times, I found myself chuckling at Stephen's douchebaggery, as it reminded me SO MUCH of my former off-and-on Stephen-esque relationship. I could actually picture him mirroring Stephen's exact same ego-centric rationale for his behaviour—justifying a hot and cold routine because he wants what he wants when he wants it. I also appreciated that Lovering didn't choose a smokeshow antagonist. Instead, Stephen's physical looks were on the average side, which I thought reinforced his dangerous nature--a seemingly innocuous exterior while inside, he was pure predator.

{I had another paragraph here, where I said some specific things about Lucy’s path, but have since realized it’s spoiler-y. I could’ve just deleted this entirely, but wanted you to know that I could talk about this incredible book for much longer than this review appears in its final version. Because yes, it’s that good.} 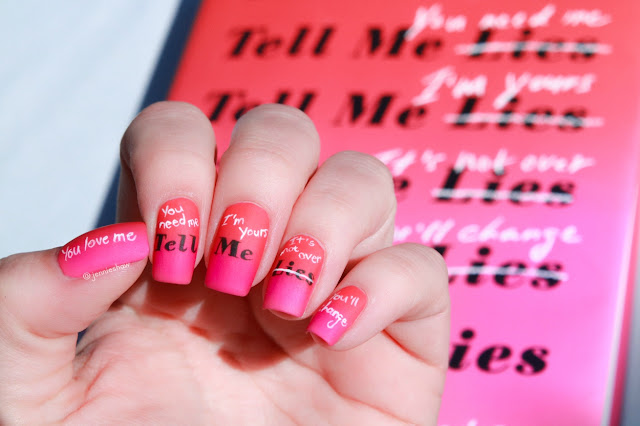 When a novel consumes me to the point that I forget it’s fiction, going so far as to have me reliving my own memories, I’m left in awe. That is absolutely the case with TELL ME LIES. I’m in actual awe of what Lovering accomplished. Characterization done to perfection, TELL ME LIES earns a standing-ovation-style five stars from me, and is a must-read for anyone who’s been sucked into the orbit of a human death star.

Big thanks to Atria Books for a finished copy, and for including me on the blog tour!

OPI – Kiss Me On My Tulips and matte topcoat

China Glaze – Kiki In Our Tiki