HERETICS ANONYMOUS came out of the gate like a llama on the loose. The voice didn’t just leap off the page, but broke into jazz hands and cartwheels—extra impressive for a llama! Haha! Lighthearted, with a toe dipped in heavier issues, this book was a fabulous break from the darker material I often find myself reading. 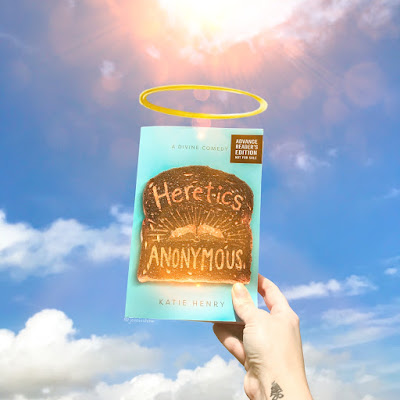 Michael is an atheist. So as he walks through the doors at St. Clare’s—a strict Catholic school—sporting a plaid tie, things can’t get much worse. His dad has just made the family move again, and Michael needs a friend. When a girl challenges their teacher in class, Michael thinks he might have found one, and a fellow nonbeliever at that. Only this girl, Lucy, is not just Catholic . . . she wants to be a priest.

But Lucy introduces Michael to other St. Clare’s outcasts, and he officially joins Heretics Anonymous, where he can be an atheist, Lucy can be an outspoken feminist, Avi can be Jewish and gay, Max can wear whatever he wants, and Eden can practice paganism. After an incident in theology class, Michael encourages the Heretics to go from secret society to rebels intent on exposing the school’s hypocrisies. When Michael takes one mission too far—putting the other Heretics at risk—he must decide whether to fight for his own freedom, or rely on faith, whatever that means, in God, his friends, or himself.

As previously stated, it took me about three seconds to fall in (platonic and super appropriate) love with Michael. His snarky-ish, razor sharp wit reminded me a lot of my high school days, when stakes were relatively low but felt much higher. I loved how Michael’s narrative totally captured the intensity of teenage years, emotions running wild while problems genuinely felt like the end of the world. Like, for instance, when one was forced to move again and then enrolled at a strict Catholic school despite being an atheist. A part of me misses that sort of intensity, but not much because the combination of little agency and fledgling coping skills inevitably led me down a path of bad decisions. Katie Henry must've had a similar experience because she lined up Michael at the edge of a diving board and then lovingly pushed him headfirst into that murky pool of hormones and tension, and the result was a triumphant and hilarious story that placed Michael at the helm. 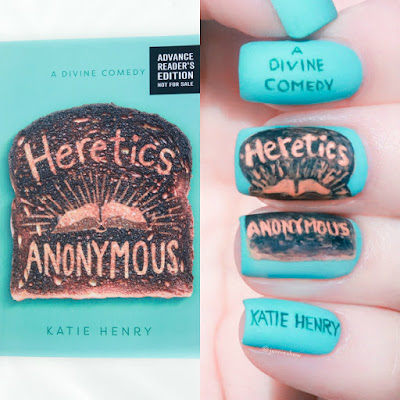 While Michael’s incredible voice and personality could’ve overshadowed other characters, the rest of the Heretics Anonymous secret society held their own. Each character had quirks and strong opinions, along with fleshed-out backgrounds. Not necessarily believing in their Catholic school mantra could’ve left each one feeling an outcast, which they kind of were, but by binding together, they created their own community, along with a manifest (which can be found on the first page). That manifest proved useful when the group decided to turn their efforts to highlighting St. Clare’s various hypocrisies, and the Heretics’ antics were easy to cheer for. That is, until they weren’t. Dun-dun-dun.*

*but not a super ominous dun-dun-dun, more like medium ominous 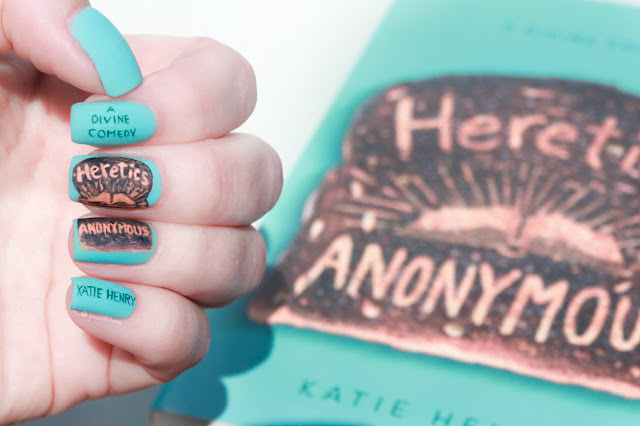 Reading along with Michael and the Heretics as they attempted to right some wrongs, and watching them grapple with the consequences of success (ooo! Twist!) took the plot around some unexpected turns. Because even the best of intentions can’t predict the future and it wasn't long before the group was forced to make hard choices. Issues of trust, faith, and the importance of honest communication were all addressed, along what it means to forgive. Yes, HERETICS ANONYMOUS had depth along with hilarity, which made it a well-rounded and thoroughly enjoyable read.

So if you appreciate a voice-tastic protagonist with a solid group of friends who decide to shake things up, or were a fan of Mandy Moore’s delightful film Saved!, then HERETICS ANONYMOUS is the book for you!

OPI – In My Back Pocket, You Don’t Know Jacques, Stay Off the Lawn, and matte topcoat

China Glaze – Water-Falling in Love, Too Yacht to Handle, and Pilates Please