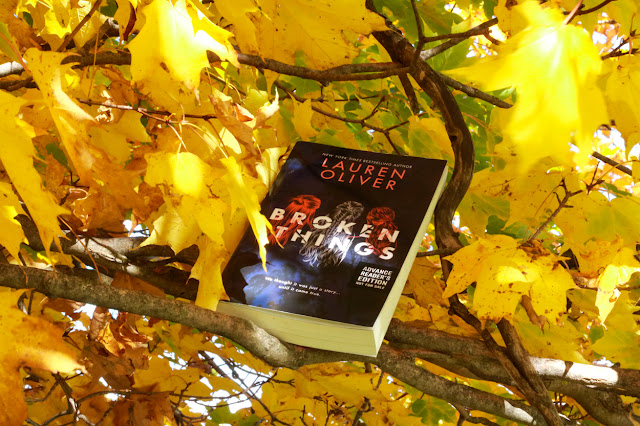 It’s been five years since Summer Marks was brutally murdered in the woods.

Everyone thinks Mia and Brynn killed their best friend. That driven by their obsession with a novel called The Way into Lovelorn the three girls had imagined themselves into the magical world where their fantasies became twisted, even deadly.

The only thing is: they didn’t do it.

On the anniversary of Summer’s death, a seemingly insignificant discovery resurrects the mystery and pulls Mia and Brynn back together once again. But as the lines begin to blur between past and present and fiction and reality, the girls must confront what really happened in the woods all those years ago—no matter how monstrous.

I’ve recently started flagging books in order to easily find my favourite lines, and while reading BROKEN THINGS in a waiting room (because that’s been my primary activity, as of late) a person chuckled to themselves while staring at my dense rows of colour-coded stickers. But random stranger judgment didn’t deter me one bit from placing three independent flags on the same page, because the writing in this book was bananas and I wanted to remember it all.  In fact, the writing was so good, it bordered on distracting. I’m seriously not kidding. From character descriptions to dialogue, setting and scenery, and simple turns of phrase, I’d read the same sentence over and over again, soaking up the awesomeness before moving on. 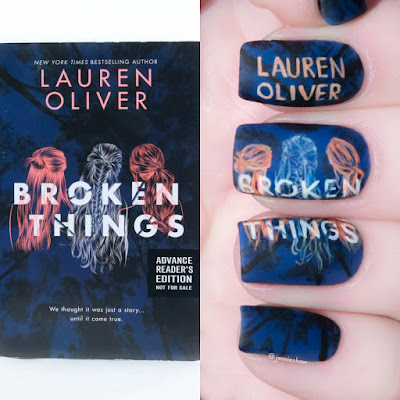 While my brain grinned like the Cheshire Cat as it basked in the magnificent composition, it was also thoroughly intrigued by Mia and Brynn’s quest to discover what happened to Summer. Through alternating chapters in the past and present, the story unfolded bit by bit. Being branded monsters for a crime they didn’t commit irrevocably changed the course of Mia and Brynn’s lives, and neither girl emerged unscathed. The hope of discovering who killed Summer had two facets: justice for Summer and absolution for the girls, so the next phase of their lives could actually begin. But in order to achieve that goal, Mia and Brynn had to address the perils of friendship with Summer. With the advantage of time and distance (five years) since Summer’s murder, they were able to gain a new perspective when looking into the past. Unfortunately, the absence of rose-tinted glasses revealed a bang-on depiction of young female friendships—how confusing and toxic they can be—which became a real standout in the story. The gaslighting, exclusion, and passive-aggressive ways the girls treated each other could be brutal, but somehow, the negative aspects only increased their dependence on each other. Oooooh yeah, it was a tangled web of hot and cold, and each girl was a willing participant, waiting for the spider’s next move. (Been there, and it was a major bummer.) 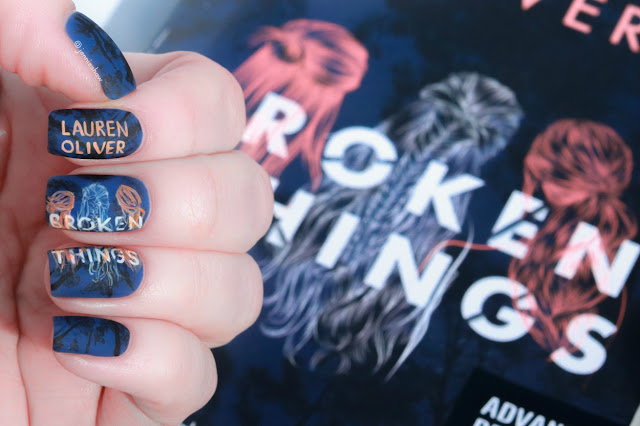 Snippets from The Way into Lovelorn gave me a taste of which parts resonated with the trio, and I loved the extra dimension. Understanding the tale's appeal and why the girls wanted to lose themselves in the fantasy fleshed out their characters even more, and I felt very connected to them. I can remember being so obsessed with fiction that elements spilled over into real life, and to be totally honest, it still happens (yay! Except for when they’re scary elements and then I regret all of my choices).

Mia and Brynn’s attempts to separate fact from fiction took some time, and with the help of a few friends—their only friends—they followed a meager collection of clues and chased down theories with intensity and focus, while simultaneously juggling serious issues in their personal lives. The significant balancing act kept the pace tight, with ample opportunity for secrets and reveals. A perfect choice for this creepier time of year, if you’re a fan of independent characters with relatable flaws a’plenty, attitude backed up by quick wit, and writing that makes you involuntarily release a sigh of admiration and delight, then BROKEN THINGS is the book for you! That said, there are scenes of animal abuse, so approach with caution if that affects you.

OPI – In My Back Pocket, Dating A Royal, and matte topcoat