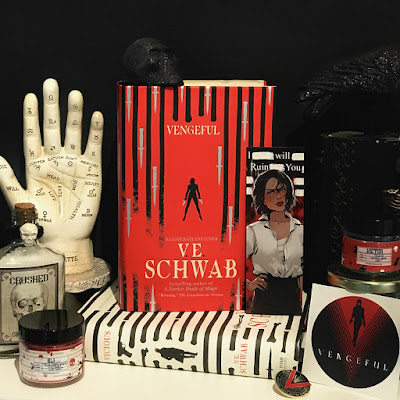 The sequel to VICIOUS, V.E. Schwab's first adult novel.
Sydney once had Serena—beloved sister, betrayed enemy, powerful ally. But now she is alone, except for her thrice-dead dog, Dol, and then there's Victor, who thinks Sydney doesn't know about his most recent act of vengeance.
Victor himself is under the radar these days—being buried and re-animated can strike concern even if one has superhuman powers. But despite his own worries, his anger remains. And Eli Ever still has yet to pay for the evil he has done.

Victoria Schwab makes my life better with her writing. Every time I pick up one of her books, whoever happens to be in my immediate vicinity is treated to my freak-outs of love via happy sighs and whispered sequences of "yessssss." Strong voices, innate conflict that builds and builds, and a healthy dollop of magic or supernatural powers are all a given in Schwab’s work, and my black heart swells whenever I glance at the special reserved shelf to the left of my writing desk, because omg the awesomeness!! And while I’m not entirely sure if it’s possible to choose a favourite Schwab novel, VENGEFUL is definitely in the running. Mostly due to a new character named Marcella, who has become my new patronus.

Now, because VENGEFUL is a sequel to VICIOUS, this is a tricky review to write without spoilers, and the very last thing I want to do is spoil even one moment of this bananapants series. That said, I couldn’t *not* paint a cover mani. It’s how I display my love for a book and when it comes to VENGEFUL, I wanted to paint my entire body. 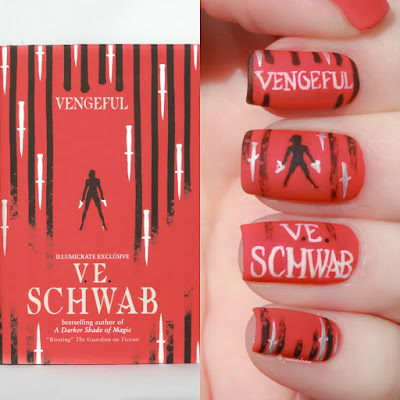 Schwab tapped directly into my core and brought forth a storyline that personified 2018’s toxicity, only instead of reinforcing my feelings of powerlessness, I felt unstoppable. Through Marcella, I was able to experience justice in the most badass of ways. Sometimes, I like to tell myself when “they go low, I go high” but that’s not my natural state. On the D&D spectrum, I score as a solid Chaotic Good and was therefore living for Marcella’s way in making things right. In taking what she wanted without giving a single fuck. In using her power for revenge. Ruthless ambition from a woman never granted respect—who was overlooked and dismissed for most of her adult life—spoke to my very soul. 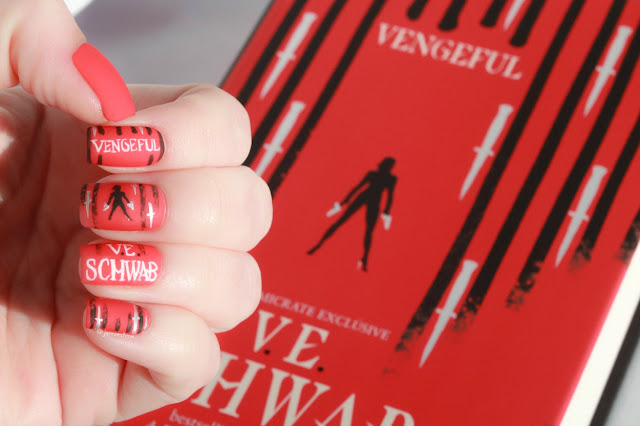 Yes, Eli and Victor were still in attendance, their relationship even more toxic than in VICIOUS, and I thoroughly enjoyed their wide character arcs. But for me, this was a book about women rising to power. Unapologetic and fierce, the female characters in VENGEFUL took what they wanted, and reading about them left me charged up and empowered, itching to cock two fingers and say, “come at me, bro.” Without a doubt, VENGEFUL is my favourite book of the year, and gets infinity stars along with my must-read recommendation. So if you’re in the mood for characters who are over the status quo, do what they want, and risk everything for revenge, then you need to read VICIOUS and VENGEFUL. Like, right now. And then, if you’re like me, you’ll spend an inordinate amount of money on merch and multiple copies, because I want to be as close to this story as possible.