As with my Goodreads goal, I'm down to the wire for rounding up my favourite reads of 2018. Recently, I've read articles that oppose sharing top ten lists, and while I agree with some points (mostly hurting authors' feelings), at the end of the day I still wanted to compile one. This year has been an incredible one for books and I'd be slacking in my book pusher responsibilities by not sharing my absolute favourites (and reinforcing why you need to read them, naturally).

An excruciating task, to be sure, but one that I enjoy because I go back and reread each of my reviews, something similar to reconnecting with old friends. Because what are books if not our friends, right?

To start out, I'll outline some basic statistics.

In total, I read 80 books this year and painted 52 cover manis. I remember being amazed in 2017 that I painted 43, so I'm pretty floored I managed to add another nine.

I've been painting cover manicures for almost four years now, and can say without hesitation that the manis from 2018 are beyond anything I dreamed I'd be able to accomplish. From picking out a single element to use as a feature nail, to gradually including multiple details, I never imagined being able to paint titles and author names, and yet, every single mani I painted in 2018 had at least one of them. Often, both. Like, WHAT?! For real. I'm astounded each and every time a cover mani turns out well, and it's brought me so much joy to share them with you.

This year was crazy in so many ways, and the highest point was, hands-down, being featured on the Goodreads blog. Still feels unreal that my moderately niche (haha, moderately. More like highly, but whatever) hobby has connected me with a seemingly endless supply of mutual book nerd enthusiasm, and I'm supremely grateful for the opportunity. So thank you, friends. You're the absolute best!!

And now, on with my favourite reads of the year!!

10. AYESHA AT LAST by Uzma Jalaluddin 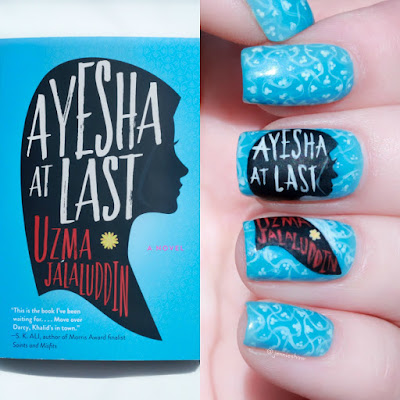 A fun and touching reimagining of Pride and Prejudice with a fresh Muslim take and Canadian setting, AYESHA AT LAST had endearingly quirky and honest characters that felt like real people. Writing as smooth as silk, both rhythmic and immersive, the astounding number of secondary story lines kept the pace tight in this epic saga of love and family. A must read for anyone who loves diverse romantic comedies about two souls who have to find themselves before they can find each other.

8. EVERY SINGLE SECRET by Emily Carpenter 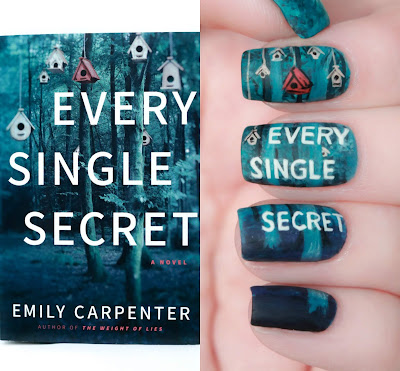 Another smash from Emily Carptenter, who has quickly become one of my favourite authors, EVERY SINGLE SECRET took an idea that's been done before and buried it alive, forcing it to rise up from a shallow grave and blow my mind. No, none of that creepy metaphor included spoilers, but it certainly painted a picture, right? Well that's the tone Carpenter threaded through this suspenseful thriller, so hold onto your pants, friends. Also of note, EVERY SINGLE SECRET was the only book of 2018 to earn my banana pantsuit level of wait what?!?! because that's exactly what you'll be saying at the end. Warning: Don't curl up with EVERY SINGLE SECRET if you have anything else to do. Once you start this one, you'll read it through to the end. 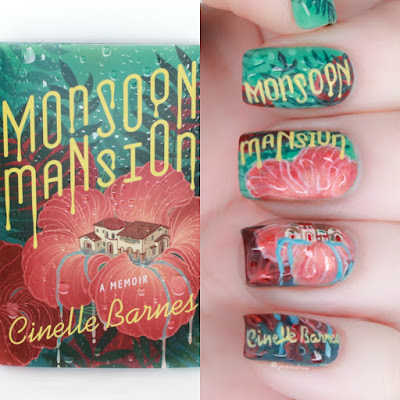 This book. Honestly, I still haven't processed MONSOON MANSION, so I can't begin to imagine what it would've felt like for Cinelle Barnes to write this raw and stunning memoir. What she endured as a child was unimaginable, and yet, she turned it into a story that stole my breath and left tear-stained pages aplenty. Hard subject matter, no question, but don't let that stop you from experiencing Barnes's unreal talent at creating beauty from ruin. Must read, times a million. This cover also wins my Fave Cover of the Year award, with it's gorgeous colour pallete, rich and lush illustrations, and mix of a matte base with glossy raindrops. Vibes galore, I adored painting it.


6. THEN SHE WAS GONE by Lisa Jewell 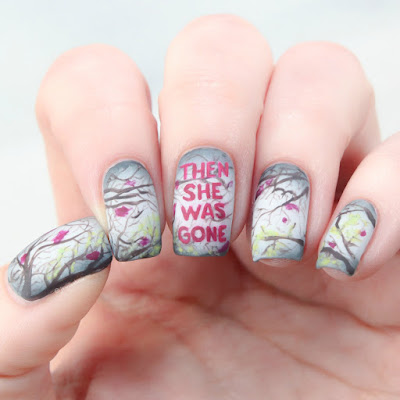 There were two different Lisa Jewell offerings this year, much to my black heart's delight, and while both were awesome, THEN SHE WAS GONE blew my cheeseburger-print socks right off. Deliciously twisted and bordering on completely deranged, Jewell outdid herself with this one. Seriously so mental, you'll probably need a strong drink and brain scrub afterwards. I know I did. 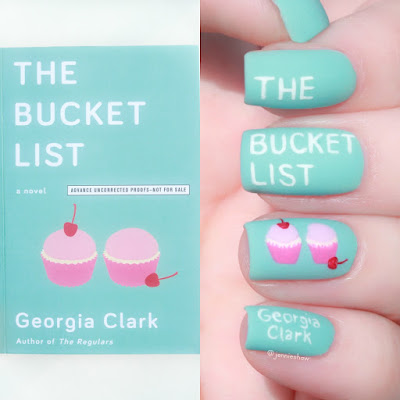 As a reader, I love being surprised by books, and the one I was most surprised about this year was THE BUCKET LIST, which managed to be sexy and fun, introspective and serious, all at once. I happy-cried, laugh-cried, sad-cried, and then needed a fan because...holy steamy (and sexuality-positive) scenes. In short, it was a profound reading experience that made me roll my eyes as I'm not accustomed to feeling feelings of this magnitude and therefore needed a cynical gesture to even things out, which means you seriously need to read THE BUCKET LIST. 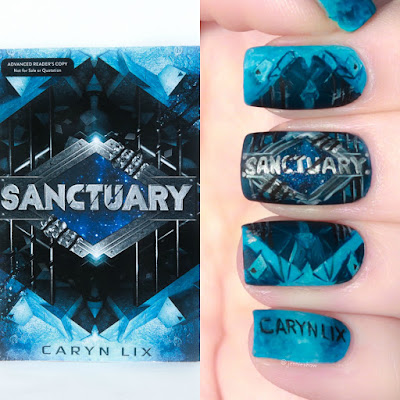 Books set in space will always pique my interest, and SANCTUARY not only piqued my interest, but  had me gasping aloud. On-point world building with a riveting plot, I cannot stress the amount of craziness contained in this YA Sci-fi. Because space prison and teen superpowers and alien attacks, OH MY. And trust me, you'll probably scream with surprise at least seven times while reading, so alert your neighbours lest they call the police, fearful that you're being held hostage, much like the protagonist, Lexie. Also, isn't it just the best when an author isn't afraid to kill characters? 😈

3. THE MAP OF SALT AND STARS by Jennifer Zeynab Joukhadar 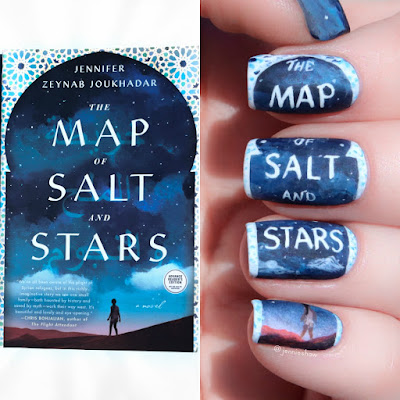 THE MAP OF SALT AND STARS is certain to land on everybody's end of year lists, because yes, it really is that good. With multiple wars happening around the globe, it's all too real of a possibility that anyone can become a displaced person. THE MAP OF SALT AND STARS told one such story, of Nour and her family who, in 2011, were forced to leave their home in Syria after a shell destroyed it. Haunting and heartbreaking, Jennifer Zeynab Joukhadar deserves all the acclaim and then some, so if you haven't read it already, you should. As soon as possible.

2. EMPIRE OF SAND by Tasha Suri 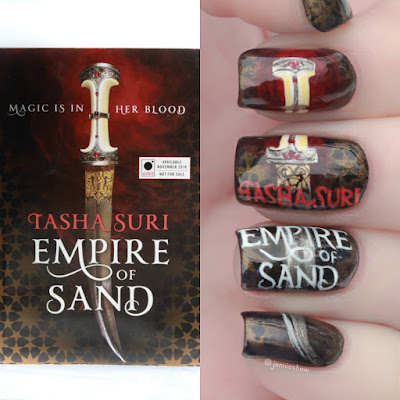 Without a doubt, EMPIRE OF SAND made me want to rent a car with a speaker system so I could drive around neighbourhoods, informing everybody within hearing range about its awesomeness. Strong characters in a nonviolent way, Mehr's internal resolve made her a force to be reckoned with. The standout element of EMPIRE OF SAND, which I don't say lightly because there were about a million incredible aspects, was Suri's masterful ability to describe physical movement. Dance played a key role in this magical world, and it was as if I moved through each step alongside Mehr. A truly glorious book in more ways than one, you'd be a fool to not read EMPIRE OF SAND. 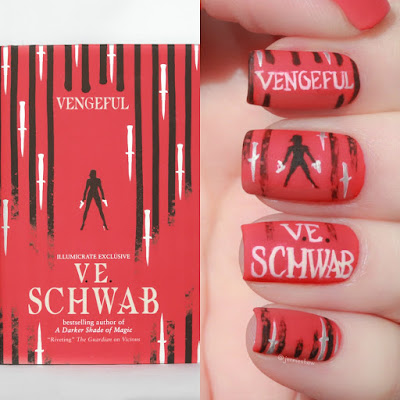 And here we are at number one, which VENGEFUL has occupied since I turned the last page. Schwab's darker voice consistently speaks to my soul, and in VENGEFUL, she introduced Marcella Morgan, who swiftly became my favourite character of all time. Yes. OF ALL TIME. Deadly, vicious, and unapologetic, Marcella helped me get through the messier parts of 2018 by letting me live vicariously through her destructiveness. A goddess of vengeance, I was left in awe and while I don't have the ability to ruin objects with my touch, for a moment or two, Marcella made me think I could. And in this mental year of ups and downs, that was an excellent feeling to have.

That does it for my top reads of 2018! Were any of yours the same? Let me know in the comments!!

I'd also like to thank the publishers, publicity teams, and authors who've sent me books this year. I read a much broader scope of fiction than I usually do, which is definitely reflected in this list, and I'm super grateful for the opportunity! Also thanks for being willing to pay the 🍌 postage to Canada!! Going to my mailbox every day has become a magical experience, and I seriously can't thank you enough.