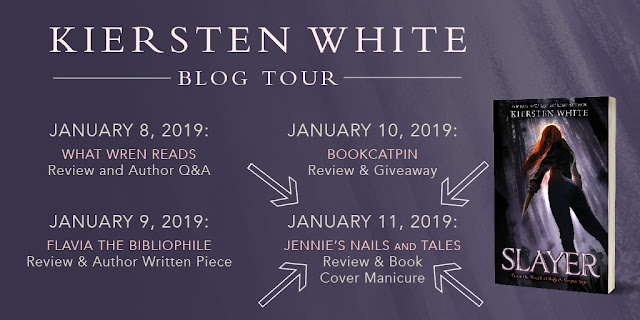 Into every generation a Slayer is born…

Nina and her twin sister, Artemis, are far from normal. It’s hard to be when you grow up at the Watcher’s Academy, which is a bit different from your average boarding school. Here teens are trained as guides for Slayers—girls gifted with supernatural strength to fight the forces of darkness. But while Nina’s mother is a prominent member of the Watcher’s Council, Nina has never embraced the violent Watcher lifestyle. Instead she follows her instincts to heal, carving out a place for herself as the school medic.

Thanks to Buffy, the famous (and infamous) Slayer that Nina’s father died protecting, Nina is not only the newest Chosen One—she’s the last Slayer, ever. Period.

As Nina hones her skills with her Watcher-in-training, Leo, there’s plenty to keep her occupied: a monster fighting ring, a demon who eats happiness, a shadowy figure that keeps popping up in Nina’s dreams…

But it’s not until bodies start turning up that Nina’s new powers will truly be tested—because someone she loves might be next.

One thing is clear: Being Chosen is easy. Making choices is hard.

SLAYER had just about everything I loved about the Buffyverse, and that’s primarily the combination of asskicking and humour. It’s hard to mix both without destroying tension and Kiersten White was fully aware of the perfect time to throw in a quip or endearingly awkward scene (omg Nina's awkwardness spoke to my soul). The previous versions of Buffy worked so well because they weren't just about Buffy slaying vampires, but her desire to be a typical teenage girl while slaying vampires. In SLAYER, Nina had dedicated her life to working behind the Watcher scene, a healer in a world dedicated to killing, so the same principle applied when she became the Chosen One and consequently (much to my delight) I was invested right away. What is it about a reluctant protagonist that makes me want to cheer? *happy sigh* 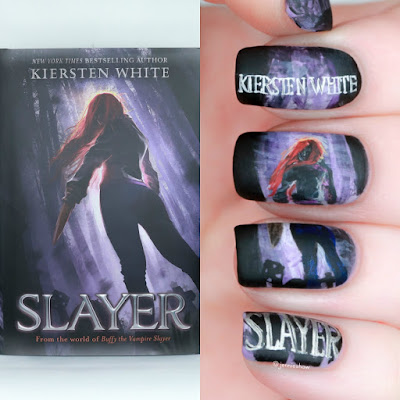 Giving Nina a combat-gifted twin sister, Artemis, added another dimension to Nina’s story, solidifying her role as healer-in-the-background. For anyone who’s grown up in their sibling’s shadow, you’re aware that once your role as “second best” is defined, it’s near impossible to get others to see you differently. So while Nina busied herself with researching and studying, Artemis was throwing knives in the training gym. Breaking out of expected roles was definitely a theme in SLAYER, which proved even more complicated for Nina because she didn’t just need the world to see her differently, but her sister as well—an impossible task and a source for buckets of tension.


Trapped between the girl she believed she was and the Slayer she had become, Nina’s personal life almost had more drama than her demon-killing life. Almost. Because wowee, friends. There was TONS of demon-killing drama. Some that even made me sad, which I didn’t expect. I also appreciated White’s inclusion of a more diverse cast. From demons to Slayers to Watchers, it’s no longer a single-serving cup of vanilla pudding. About time. 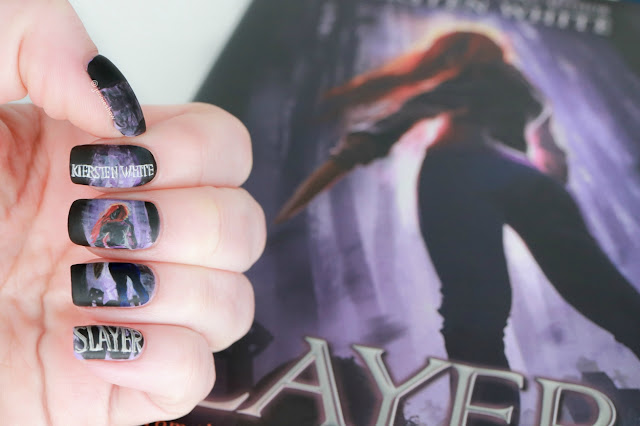 In terms of setting up readers who know little to nothing about the Buffyverse, White did a great job summarizing plot points of the past, and while it bordered on an info dump in the beginning, there was no other way to cover such a vast amount of background information. White’s ability to find a fresh thread in the ongoing Buffy saga, one that paid tribute to fandom history while setting the stage for an entirely new story, brought back so many memories and simultaneously got me excited for the future. So for new and seasoned Buffy fans alike, SLAYER will definitely satisfy all of your bloody and supernatural-coming-of-age cravings.

Big thanks to Simon & Schuster Canada for a finished copy, and for including me on the blog tour!

OPI – Towel Me About It, Yoga-Ta Get This Blue, Viking in a Vinter Vonderland, I Just Can’t Cope-acabana, Do You Lilac It?, In My Back Pocket, A Good Man-Darin Is Hard to Find, matte topcoat