review and cover mani: no exit 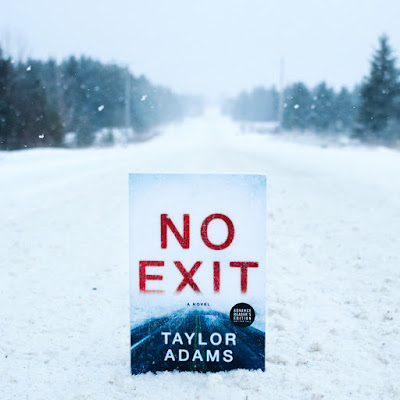 A brilliant, edgy thriller about four strangers, a blizzard, a kidnapped child, and a determined young woman desperate to unmask and outwit a vicious psychopath.

A kidnapped little girl locked in a stranger’s van. No help for miles. What would you do?

On her way to Utah to see her dying mother, college student Darby Thorne gets caught in a fierce blizzard in the mountains of Colorado. With the roads impassable, she’s forced to wait out the storm at a remote highway rest stop. Inside are some vending machines, a coffee maker, and four complete strangers.

Desperate to find a signal to call home, Darby goes back out into the storm . . . and makes a horrifying discovery. In the back of the van parked next to her car, a little girl is locked in an animal crate.

Who is the child? Why has she been taken? And how can Darby save her?

There is no cell phone reception, no telephone, and no way out. One of her fellow travelers is a kidnapper. But which one?

Trapped in an increasingly dangerous situation, with a child’s life and her own on the line, Darby must find a way to break the girl out of the van and escape.

But who can she trust?

With exquisitely controlled pacing, Taylor Adams diabolically ratchets up the tension with every page. Full of terrifying twists and hairpin turns, No Exit will have you on the edge of your seat and leave you breathless.

Holy shit this book. HOLY SHIT. I read it in less than 48 hours and my heart still hasn’t stopped pounding. Clearly an author who doesn’t shy away from making things hard for his characters, Taylor Adams created one seriously intense gauntlet of terror for Darby. Because yiiiiiiiikes, did things get dark. 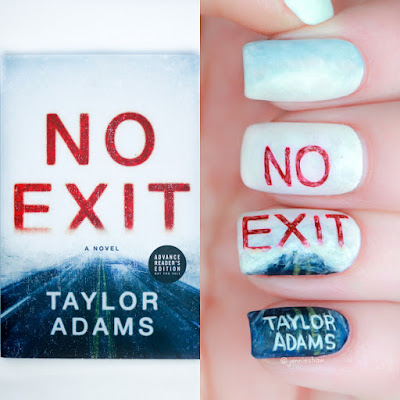 A contained setting from the beginning, the blizzard acted like a literal snowglobe, trapping Darby and four other strangers in a random rest stop, miles from civilization. With no cell coverage, dwindling batteries, and the unexpected discovery of a child trapped in a dog crate, Darby had the hard choice of deciding whether or not to get involved. Like a glorified “what would you do” hidden camera setup, only without cameras and far more potential for violence. Relentlessly paced, NO EXIT followed Darby through her limited options, and took a character who’d rather do nothing and forced her to act. I seem to have a thing for reluctant protagonists, and Darby’s character growth within one terrifying night created a well-rounded story in what could’ve become the equivalent of a slasher flick. That’s my way of saying it was gory and full of SURPRISES, but there was more than external plot in play. I legitimately cared for Darby, which meant my heart was lodged in my throat for roughly 80% of this book. 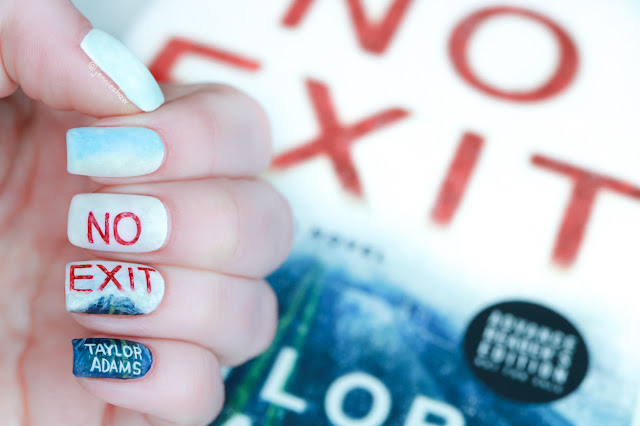 So be warned, fellow readers, because NO EXIT is all sorts of violent—the sort of violence that made me cringe, unsure if I’d be able to go on. If you’re squeamish or shy away from gore, you’ll likely have a hard time with parts of the book, but it didn’t seem superfluous. Instead, the increasing violence cranked the tension to the point where I didn’t know who would make it out alive. That said, if you can handle Die Hard, you’ll be fine.

Grisly but real, Darby was pushed far past her limits, which unleashed a fierceness that made her a force to be reckoned with and thank goodness or NO EXIT wouldn’t have been nearly as addictive. With more twists than a corkscrew (which would’ve made for a great weapon, actually) NO EXIT held me captive until the very last page, and is a fabulous choice for fans of darker thrillers that will likely give you nightmares. Five stars all the way.