review and cover mani: man of the year 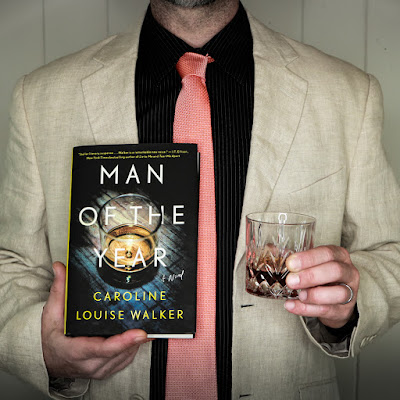 Beware the Man of the Year. You may praise him, resent him, even want to be him: but beneath the elegant trappings that define him, danger looms. Caroline Louise Walker’s stunning debut novel, for fans of Herman Koch’s The Dinner and Shari Lapena’s The Couple Next Door, delves into the increasingly paranoid mind of a man whose life as the most upstanding of citizens hides a relentlessly dark heart.

Dr. Robert Hart, Sag Harbor’s just-named Man of the Year, is the envy of his friends and neighbors. His medical practice is thriving. He has a beautiful old house and a beautiful new wife and a beautiful boat docked in the village marina. Even his wayward son, Jonah, is back on track, doing well at school, finally worthy of his father’s attentions. So when Jonah’s troubled college roommate, Nick, needs a place to stay for the summer, Hart and his wife generously offer him their guest house. A win-win: Jonah will have someone to hang with, and his father can bask in the warm glow of his own generosity.

But when he begins to notice his new houseguest getting a little too close to his wife, the good doctor’s veneer begins to crack. All the little lies Robert tells—harmless falsehoods meant to protect everything he holds dear—begin to mount. Before long, he’s embroiled in a desperate downward spiral, destroying the lives that stand in his way. It’s only the women in his life—his devoted office manager, his friends, his wife—who can clearly see the truth.

Biting and timely, Man of the Year races along at an electric pace, with a wicked twist that you won’t see coming.

Watching a white, arrogant man self-destruct is my new favourite pastime thanks to MAN OF THE YEAR. The sort of guy who’d read a Huffington Post article and consider himself an expert, happy to mansplain at a moment’s notice, Robert proved to be just smart enough to destroy himself. No matter the situation, he consistently made the worst choices while his narrative showed a strong belief that he was outmanoeuvring everyone around him. Instead, he was losing his damn mind. The absolute best at being the worst—a character I loved to hate—this gem quickly became black humour central. No surprise that Walker wrote this character so flawlessly, as I doubt a man would possess the self-awareness to pen such blind confidence and entitlement. At times, I felt like Walker and I were making sly eye contact, a Jim looks to the camera moment if you will, sharing our mutual amusement over Robert’s behaviour. 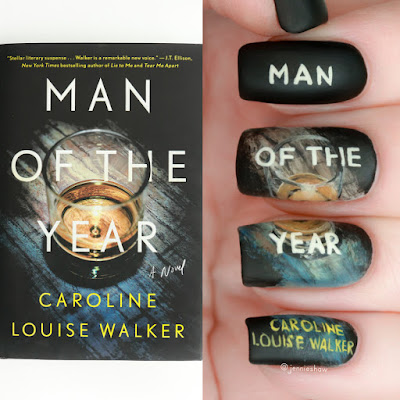 While my morbid enjoyment of Robert’s paranoia took the front seat in my reading experience, there was also a fair amount of tension. I understood early on that Robert would create an epic clusterfuck, and with the way Walker set up questionable and suspicious scenarios, I didn’t blame him. Every character held significant secrets and including alternate points of view had me chuckling aloud because oh no collision course, dead ahead. Essentially, a booknerd’s dream come true. Driving the plot with internal tension is exactly what suspense should be, and I was delighted to be reminded. 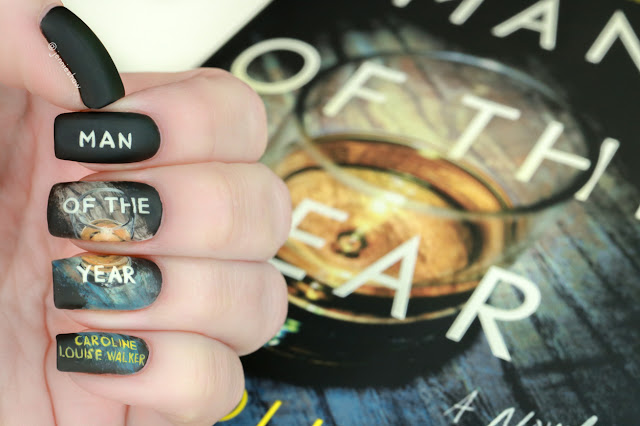 MAN OF THE YEAR did take a while to get going and the ending wasn’t as sinister as I’d expected from the build up, but even so, this debut novel cemented my auto-buy status for Caroline Louise Walker. A solid four star read, I’m eager to see what Walker writes next. Big thanks to Gallery Books for a complimentary finished copy!

OPI – In My Back Pocket, I Just Can’t Cope-acabana, Can’t Find My Czechbok, matte topcoat

So Nailicious – needle and warrior brush

review and cover mani: before the broken star 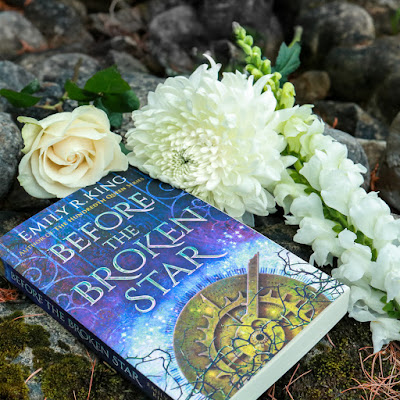 A fierce young female adventurer battles time itself to claim her destiny in a sweeping new fantasy saga from the author of the Hundredth Queen series.

Everley Donovan is living on borrowed time. The lone survivor of her family’s unexplained assassination, she was saved by an ingeniously crafted clockwork heart. But the time she was given won’t last forever. Now, every tick-tock reminds her how fragile her existence is and hastens her quest to expose Killian Markham, the navy admiral who shattered her world and left her for dead. But Everley’s hunt for justice will be a long and hard-won voyage.

Her journey takes her to a penal colony on a cursed isle, where she will be married off and charged to build the new world. It is here, and beyond, that hidden realms hide, treasures are unearthed, her family secrets are buried, and young love will test the strength of her makeshift heart. When Everley discovers Markham may not be who he seems, her pursuit for truth is bound to his redemption, her tragic history, and her astonishing destiny.

BEFORE THE BROKEN STAR had everything I love in a YA fantasy, which meant I devoured it. Charging out of the gate with high emotional content—desire for revenge (yay!)—and Everley’s clockwork heart, then sword fights in petticoats and a treacherous journey to a penal colony, the story sucked me in as the world melted away. Like the greats Bardugo and Schwab, there wasn’t a wasted word or wink, each action and phrase driving the plot forward, not a lull to be seen. I burned through chapters with abandon because just when one problem was solved, two more appeared like a metaphorical hydra beast of complications and revelations. 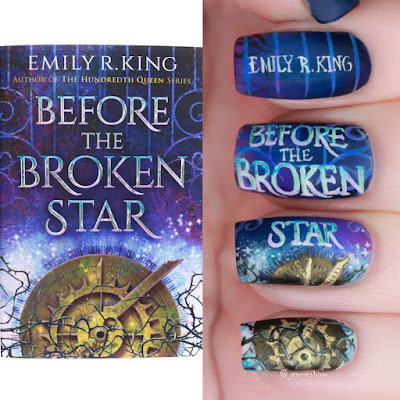 The hostile and cursed island, populated by convicts and Everley’s new home, proved to be a formidable malevolent environment that forced Everley to confront family secrets. And oh the secrets she discovered! While the pace moved quickly in the first half, once upon the island, things kicked into warp speed. Adventure, tension, and magic, plus lurking threats along the way kept my heart rate up to such a degree, I was shocked to find my pedometer count unchanged. I adore books that leave me breathless, as if I’d run ten miles, and BEFORE THE BROKEN STAR became the latest addition to that short list. 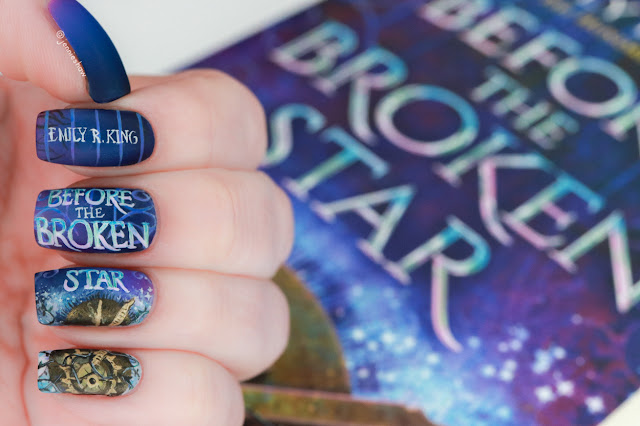 I appreciated the end to the storyline (to a degree 😉), as cliffhangers in a series make me want to throw things across the room. I absolutely cannot wait for the next book and will be counting down the days until it’s in my greedy paws. If you love young women who don’t take any crap, zooming paces, and dynamic characters, you need to read BEFORE THE BROKEN STAR. Five stars all the way!

Big thanks to Thomas Allen & Son for a complimentary finished copy!

OPI – Stay Off the Lawn, Fearlessly Alice, Rollin’ In Cashmere, Mod About You, and I Just Can’t Cope-acabana

China Glaze – I Got a Blue Attitude, Born to Rule, Wicked Liquid, Boujee Board, and Up All Night

review and cover mani: donna has left the building 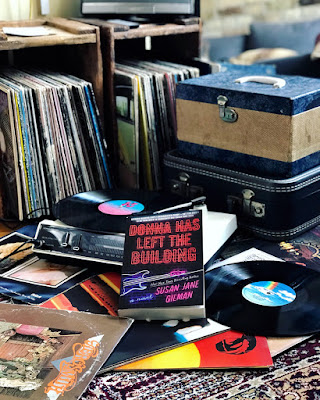 From the beloved, New York Times bestselling author of Hypocrite in a Pouffy White Dress comes a hilarious, timely, and big-hearted new novel about rebuilding life in the face of disaster.

Forty-five-year-old Donna Koczynski is an ex-punk rocker, a recovering alcoholic, and the mother of two teenagers whose suburban existence detonates when she comes home early from a sales conference in Las Vegas to the surprise of a lifetime. As her world implodes, she sets off on an epic road trip to reclaim everything she believes she's sacrificed since her wild youth: Great friendship, passionate love, and her art. But as she careens across the U.S. from Detroit to New York to Memphis to Nashville, nothing turns out as she imagines. Ultimately, she finds herself resurrected on the other side of the globe, on a remote island embroiled in a crisis far bigger than her own.


Irresistibly funny, whip-smart, and surprisingly moving, Donna Has Left the Building spins an unforgettable tale about what it means to be brave—and to truly love—in a tumultuous world.

Like Uncle Albert and Bert from the OG Mary Poppins, I love to laugh. Whenever possible, I lean into humour because hello! Happy, belly aching, tear producing, breath stealing laughter is where it’s at. And oh my, it's been a long time since a book has tickled my funny bone so relentlessly. In DONNA HAS LEFT THE BUILDING, what may appear to be a typical “wife comes home early to find husband in compromising situation” story is anything but. I cannot stress this enough: In no shape, way, or form have you read anything like this treasure trove of hilarity. Granted, Donna didn't find it terribly amusing, but that’s the awesomeness of fiction, right? Think The Good Place sort of emotional torture. 😂 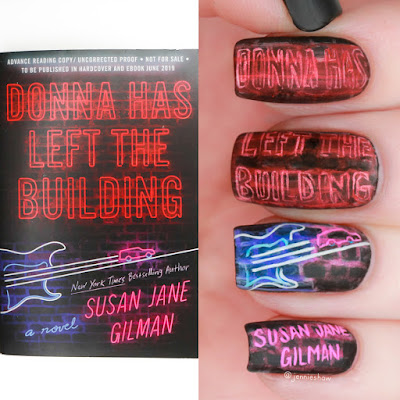 But as I laughed my face off while reading on the couch, in bed, and three public waiting rooms, Donna’s journey began to delve into emotional territory. During Donna’s impromptu cross-country road trip, she had to confront the past she remembered with rose-tinted glasses and non-spoiler alert: things didn’t go according to her haphazard plans. Like, at all. Not even a tiny bit. And just when I wasn’t sure if Donna would be able to get out of her own way, the plot took a major turn when she wound up on a remote island where the vibe was anything but jovial. I’ve gotta say it felt a little jarring, on the verge of being two separate books smushed together. Even with steady hints regarding what Donna would be sucked into, the sudden shift in tone could’ve been smoother. Not that it was bad, but Donna’s voice started out like jazz hands and then became subdued as the final quarter came to pass. Reflective, perhaps, and there’s nothing like a genuine crisis to have one reflect on their previous behaviour. *side-eyes Donna* 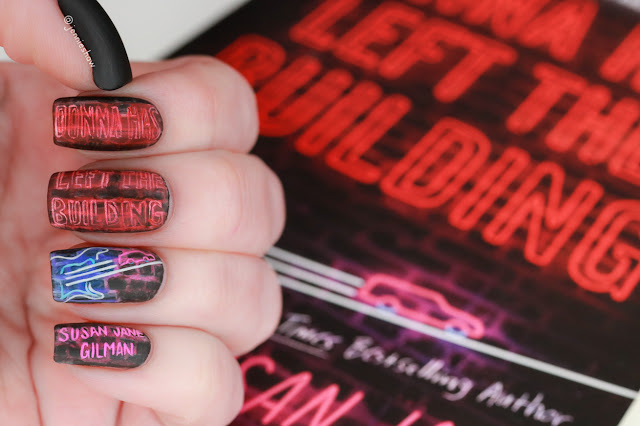 If you love books that flip expected tropes and crank them up to 11, while snickering as wildly unpredictable characters take you on a ride, DONNA HAS LEFT THE BUILDING is the book for you! It hit shelves yesterday, June 4th, so I encourage you to run like the wind to your bookseller of choice because this gem is a must read. Big thanks to Hachette Book Group Canada for a complimentary ARC!

OPI – A Good Man-Darin Is Hard to Find, matte topcoat

China Glaze – I Got a Blue Attitude and Bottoms Up