review and cover mani: the unlikely escape of uriah heep

Back jacket description, from Goodreads:

The ultimate book-lover's fantasy, featuring a young scholar with the power to bring literary characters into the world, for fans of The Magicians, Mr. Penumbra's 24-Hour Bookstore, and The Invisible Library.

For his entire life, Charley Sutherland has concealed a magical ability he can't quite control: he can bring characters from books into the real world. His older brother, Rob -- a young lawyer with a normal house, a normal fiancee, and an utterly normal life -- hopes that this strange family secret will disappear with disuse, and he will be discharged from his life's duty of protecting Charley and the real world from each other. But then, literary characters start causing trouble in their city, making threats about destroying the world... and for once, it isn't Charley's doing.

There's someone else who shares his powers. It's up to Charley and a reluctant Rob to stop them, before these characters tear apart the fabric of reality.

Let’s get one thing straight right away: I remain pleasantly surprised by how much I loved THE UNLIKELY ESCAPE OF URIAH HEEP. Mostly because I’m not even close to the ideal reader for this delightful crumpet of a novel, thanks to my aversion of literary classics. Yet despite my clear bias, I was hooked on the first page and had tears projecting from my face by the end. So please believe me when I say that everyone needs to read this book.

I don’t even know how to compose this review because there were five hundred things I loved and most of them are spoilers. But I can mention that I took two weeks to read THE UNLIKELY ESCAPE because it’s dense, which worked out fine for me. I didn’t want to leave this world. *hugs hardcover* 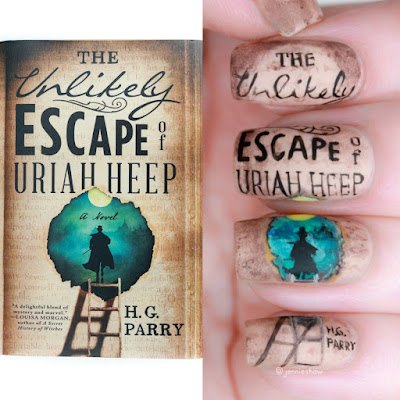 I think the key to why I connected so deeply to the story lies in two factors. First, making Rob the primary narrator. As I’m not really a fan of classics and wouldn’t have a clue about quotes or significance, I entered with hesitancy because there’s nothing worse than a book making me feel stupid. For instance, I didn’t know who Uriah Heep was (*literary ignorant jazz hands*). But much to my relief, Rob, older brother to Charley (the one who possessed the summoning ability) didn’t know squat about literary critique either. So while it took me a minute to understand why the person with the powers wasn’t narrating, once it clicked, I knew I could dive right in. Whenever a literary reference popped up, an organic explanation came alongside, therefore making classics accessible. Brilliant! The second factor was EVERYTHING ELSE. The voice(s), the prose, the characters Charley pulled from books, the enormous scope of the plot, Rob and Charley’s complicated sibling relationship—both on separate and parallel arcs, the idea that literary characters aren’t static and open to interpretation (god this was done so well), plus the secrets. So many secrets. The slow burn pace resulted in a frickin’ forest fire with oodles of twists, so I can’t for the life of me understand how are there only 90 reviews on Goodreads. I was highly entertained and also learned about classic lit. I mean, come on!! Why isn’t this book all over bookstagram?! Why is nobody talking about this gem?! STOP READING THIS REVIEW AND ORDER/RESERVE THE UNLIKELY ESCAPE OF URIAH HEEP RIGHT NOW. For the love of everything, you need to read it. One million and five stars.

Big thanks to Orbit Books for sending a finished copy!